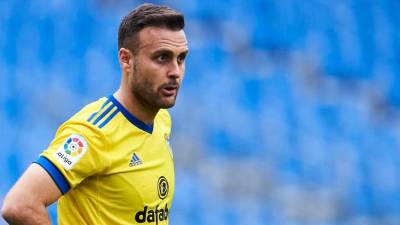 MADRID: Cadiz defender Juan Cala (pix) has said he will not hide away after being accused of making a racial slur to Mouctar Diakhaby in Sunday’s 2-1 win over Valencia.

The Spaniard, who had an altercation with Diakhaby leading to the Frenchman telling the referee he had been racially abused, said he will give his side of the story on Tuesday.

The entire Valencia team left the pitch in protest after Diakhaby said he had been abused but returned after being told by the referee they could be sanctioned if they did not return to the pitch.

Diakhaby asked to be substituted as he did not want to continue playing, and Cala, who scored the opening goal, was taken off by coach Alvaro Cervera at halftime.

The Spanish defender told Spanish network Gol at the club’s training ground on Monday he was calm after the incident and that he will explain everything in a news conference on Tuesday.

“I’m not going to hide,” he said. “It seems like the presumption you are innocent before proven guilty doesn’t exist in this country.”

Cala did not speak to the media or post on social media after the game, although his coach Cervera said the defender had told him he had not insulted Diakhaby.

Cadiz said they opposed racism and xenophobia “regardless of who the perpetrator is”, adding that “anyone who commits these acts should pay for them, even if they play for our team”.

Neither La Liga nor the Spanish soccer federation have announced whether Cala is being investigated.

“We take any allegation of racism seriously and will work with the clubs and refereeing establishment to do whatever is necessary to protect the values of equality and respect that prevail in our Spanish professional football competition,” La Liga said on Monday.

“La Liga condemns racism in all shapes and forms and has been an active party in persecuting hate crimes in Spain.” – Reuters