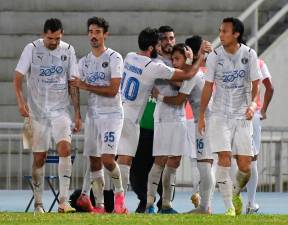 KUALA LUMPUR: Penang FC stepped up their quest for a slot in the 2022 AFC Cup with a crucial come-from-behind 2-1 win over Sri Pahang FC at the Darul Makmur Stadium in Kuantan yesterday to occupy second spot in the Super League standings.

After a goalless first half, the hosts, also known as the Elephants, shot into the lead in the 61st minute when their Sudanese striker Kenny Athiu applied the finishing touch to a perfect cross from Muhammad Baqiuddin Shamsuddin.

The win was enough for Penang to collect all three points to sit in second spot with 40 points after 21 matches, overtaking Kedah Darul Aman (KDA) FC, who have 39 points but with a game in hand, followed by Terengganu FC on 37 points.

Kedah, though, can reclaim second spot if they beat already relegated UiTM FC at the Darul Aman Stadium in Alor Setar on Wednesday (Sept 8).

Meanwhile, over at the Likas Stadium in Kota Kinabalu, Selangor FC’s Nigerian import Ifedayo Olusegun notched a hat-trick to inspire the Red Giants to a 6-0 hammering of Sabah FC for their biggest win of the season.

Ifedayo proved to be a handful for Sabah as he struck twice in two minutes – 22nd and 24th – to put Selangor 2-0 before Mukhairi Ajmal added a third in injury time (45+1) as the Red Giants trooped off with a comfortable 3-0 lead at the break.

The second half was hardly a minute old when Selangor went 4-0 through Mohammad Nor Hakim Hassan before Ahmad Danial Ahmad Asri made it 5-0 in the 75th minute.

Ifedayo then completed his hat-trick in the 89th minute, setting a new record of 25 goals in a Super League season. –Bernama