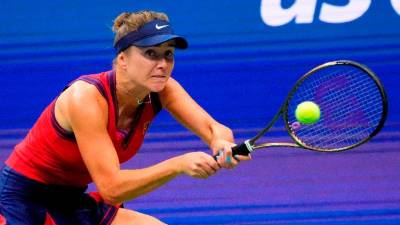 “Definitely was a great match,” Svitolina said. “I was really excited. I know how big a fighter is Simona. I had to bring my best game. For sure I’m happy with the win.”

Svitolina, who hasn’t dropped a set this week, made her deepest Slam runs to the 2019 US Open and Wimbledon semi-finals.

Svitolina will next play either German 16th seed Angelique Kerber, whose three Grand Slam titles include the 2016 US Open, or 18-year-old Canadian Leylah Fernandez, who ousted 2020 champion Naomi Osaka.

After an exchange of early breaks, Svitolina broke on an errant backhand in the eighth game and held to claim the opening set after 34 minutes.

Former world No. 1 Halep, the 2018 French Open and 2019 Wimbledon champion, netted a backhand to give Svitolina a break for a 2-1 edge but broke back in the next game with a backhand cross-court winner.

Medvedev, the 2021 Australian Open and 2019 US Open runner-up, has not dropped a set in New York while Evans has matched his best Grand Slam run from the 2017 Australian Open.

With only nine seeds among the men’s last 16, it’s the fewest seeds to advance so far at a Slam since nine at Wimbledon in 2013 and at a US Open since eight in 2005.

Van de Zandschulp would be the first Dutchman in a Slam quarter-final since 2004 at Wimbledon and at the US Open since 2003.

He would also match the best showing by any US Open qualifier, last-eight runs by Frenchman Nicolas Escude in 1999 and Gilles Muller of Luxembourg in 2008.

Alcaraz or Gojowczyk will have a quarterfinal against either Canadian 12th seed Felix Auger-Aliassime or American Frances Tiafoe, with one of the four assured of playing his first Grand Slam semifinal.

Alcaraz would be the youngest US Open men’s quarterfinalist since Brazilian Thomaz Koch in 1963.

The US Open is the only Slam where Muguruza has failed to reach the quarterfinals. – AFP