Hernandez pride as brothers hope to play together for France

Hernandez pride as brothers hope to play together for France 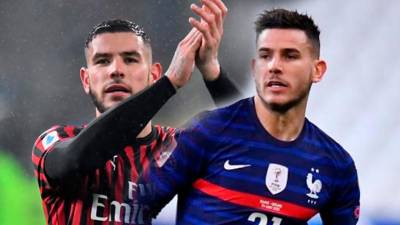 PARIS: Lucas and Theo Hernandez were beaming with pride as they both featured in France’s squad for the Nations League Final Four this week, possibly marking the first time brothers will play together in the national team since the Revellis in the 1970s.

Lucas won the World Cup with Les Bleus in 2018 but his younger brother Theo earned his first cap last month in a World Cup qualifier against Finland.

“It’s a source of pride, a pleasure to be here with my brother. We couldn’t dream of this as children. It is exceptional, incredible,” Bayern Munich defender Lucas, who won the first of his 28 caps in March 2018, told a news conference on Tuesday, two days before France take on Belgium in the semifinals in Turin.

“It is an incredible moment for the whole family. It is a moment of happiness and pleasure. We haven’t been able to train together yet, so it will be nice. These are unique moments.”

The 23-year-old Theo, who plays at left back for AC Milan, was used on the left wing in a 3-4-1-2 formation against Finland while Lucas, 25, can play centreback although he is mostly played as a leftback by Deschamps.

Whether they will actually play together is anyone’s guess but their versatility makes it possible.

With Lucas preferring the centreback position, Theo believes the dream can come true.

“It’s an honour to be here with my brother. My mum, my grandfather and the whole family are very happy,” he said.

Deschamps also included Theo among the midfielders when he unveiled his squad last week.

“He’s neither a defender nor a forward so I put him with the midfielders,” the coach said with a smile.

Should they be fielded together it will be the first time brothers play in the same France side since Herve and Patrick Revelli against Romania in March, 1974. – Reuters