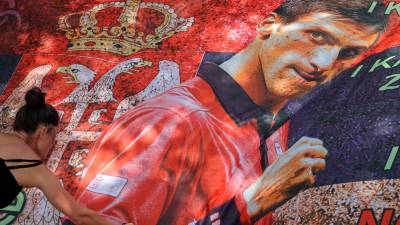 MELBOURNE: Novak Djokovic has received support from one of his fiercest critics with Nick Kyrgios criticizing the way the world number one has been treated in Australia and saying authorities must do better for “one of our great champions”.

Djokovic, who has won a record nine Australian Open titles, was detained at the Melbourne airport on Wednesday evening and his entry visa, supported by an medical exemption from the country’s vaccination requirements, was revoked.

Federal Border Force officials at the airport said Djokovic was unable to justify the grounds for his exemption.

Chasing a men’s record 21st Grand Slam, Djokovic is holed up in immigration detention as his lawyers battle to secure his release to play in the Australian Open and be exempt from strict COVID-19 vaccination requirements.

Kyrgios, who labelled Djokovic a “tool” after the Serb sought to improve quarantine conditions for players ahead of last year’s Grand Slam, said the situation had been handled poorly.

“Look I definitely believe in taking action, I got vaccinated because of others and for my mum’s health, but how we are handling Novak’s situation is bad, really bad,“ tweeted Kyrgios.

“Like these memes, headlines, this is one of our great champions but at the end of the day, he is human. Do better.”

American player John Isner said Djokovic had followed all rules and did not deserve to be treated this way.

“What Novak is going through right now is not right,“ Isner said on Twitter. “There’s no justification for the treatment he’s receiving … This is such a shame.”

Former U.S. Open champion Marin Cilic hoped the situation would be quickly resolved and that the whole episode was not good for the sport.

“Definitely it’s not a great picture for tennis,“ Cilic told reporters in Adelaide on Friday.

The Professional Tennis Players Association (PTPA), the breakaway players’ body launched by Djokovic in 2020, said in a statement that they were in close contact with him.

“Djokovic has verified his well-being to us,“ the PTPA said in a statement. “He has also requested that we allow him to personally share the facts of his detainment in his own words, and in his own time.”

Rafa Nadal, who is also in the hunt for a 21st Grand Slam title at Melbourne Park, was among those who pointed out the Serb knew for months he could potentially face problems if he arrived without being vaccinated against Covid-19.

German tennis great Boris Becker, who coached Djokovic to six majors, urged him to get vaccinated.

“As his former coach I am so close to Novak Djokovic that I would almost regard him as family — but like in all families you sometimes have disagreements,“ Becker wrote in a Daily Mail column.

“And on this occasion I think he is making a big mistake in not getting vaccinated. It is one that threatens what remains of his career and his chance to cement himself as the greatest player of all time.”

Becker was, however, unsure if Djokovic would change his mind.

“The same incredible determination which I saw win so many close matches can be a vulnerability with his stubbornness,“ Becker added. “Will Novak take that step? I am not sure that he will.

“He is incredibly strong-willed, with very firm beliefs. If he does not, then in 10 years he will look back on it and realise he made a mistake.”-Reuters