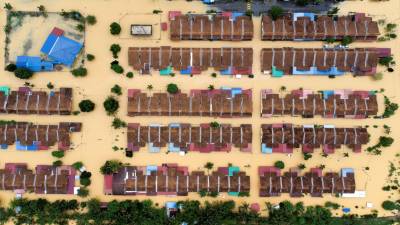 PARIS: England open their pursuit of a second Six Nations title in five months with a showdown against their oldest rivals Scotland on Saturday, but will be looking over their shoulders at another threat in blue.

At the end of a coronavirus-interrupted tournament last year, Eddie Jones’ side picked up a bonus point against Italy on the final day to edge France to the Championship on points difference.

Perennial wooden spoon winners the Azzurri set the ball rolling at a sun-drenched Olympic Stadium against les Bleus before the action moves to Twickenham and then Wales host Ireland in Cardiff on Sunday.

The clash in London comes seven weeks before the 150th anniversary of the first rugby international, between the same teams in Edinburgh. The Calcutta Cup was introduced as a trophy for the winner in 1879.

“The first game of the tournament, we play for one of the oldest trophies in sport, 142 years since we have played for the Calcutta Cup, 150 years since this game was first played,” said Scotland coach Gregor Townsend.

“It is the biggest game every year for us.”

The Dark Blues may be heartened from comments made by England scrum-half Ben Youngs they can win for the first time at Twickenham since 1983 – although an astonishing comeback by Scotland saw them draw 38-38 there in 2019.

The 31-year-old told the BBC he did not expect it to be “plain sailing.”

“A lot of us have not played for the best part of a month to five weeks,” said Youngs.

“You can do all the fitness in the world, but as people say, there’s nothing like actually playing the game.”

Saturday’s match is taking place behind closed doors due to the Covid-19 pandemic.

“It becomes more of a neutral venue,” said Townsend.

“But you have got to make sure you play rugby, and not wait for any lack of crowd noise to help you.”

England went on to be crowned champions last year despite losing their opening match in Paris.

They got a helping hand from Scotland, who beat Galthie’s outfit at Murrayfield in the last match before the tournament was suspended.

France are nursing a sense of a job unfinished as they start their campaign in Rome.

“This tournament has been on everyone’s mind for a while. The whole squad wants to get down to business,” said captain Charles Ollivon.

They have been training in a bio-secure bubble in Nice.

“We all agree with the conditions,” said the 27-year-old. “We know, suddenly, that we have to respect a lot of rules.”

“It also helps to strengthen bonds.”

Italy have more modest goals. They want to end a run of 27 consecutive defeats in the tournament since they beat Scotland in 2015.

“The real opponent is ourselves, it doesn’t really matter who we play against,” said their South African coach Franco Smith.

The weekend ends in Cardiff, with the hosts especially seeking to show a marked improvement this year.

The pressure on home coach Wayne Pivac is immense, after the 2019 Grand Slam winners put up a dire defence of their title in his first campaign in charge and beat only Italy.

Pivac’s men have lost their past four Tests against Ireland, but the visitors last won a Six Nations match in Cardiff in 2013.

Pivac had talked about building squad depth ahead of the 2023 Rugby World Cup but accepts he needs to win this weekend and has picked an experienced sided.

“In round one, we’re obviously after a result,” he said.

Pivac’s counterpart Andy Farrell is also under a bit of pressure after their results last year were only judged “acceptable” by Irish Rugby Football Union performance director David Nucifora.

“It is a huge game for both teams and it will be a war of attrition,” said Farrell. – AFP