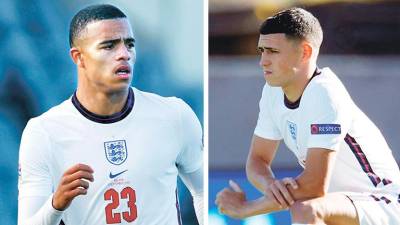 LONDON: England youngsters Mason Greenwood and Phil Foden could both face disciplinary action after video footage emerged of them allegedly inviting girls to their rooms after Saturday’s Nations League win against Iceland in Reykjavik.

The footage came to light on Icelandic outlet DV after the girls shared videos on Snapchat on Sunday.

Like all of the England squad Greenwood and Foden, who made their senior international debuts in the 1-0 win, were subject to strict COVID-19 health protocols to avoid quarantine rules.

These included not meeting anyone outside of the England squad and staff during the team’s stay in Iceland.

England will face Denmark away on Tuesday with manager Gareth Southgate expected to talk about Greenwood and Foden’s apparent breach of discipline at a news conference later on Monday. Both face being dropped for Tuesday’s clash.

According to the Daily Mail both players were absent from training on Monday.

The Football Association was approached by Reuters for a comment but was yet to respond. – Reuters

Christen Press has been here before