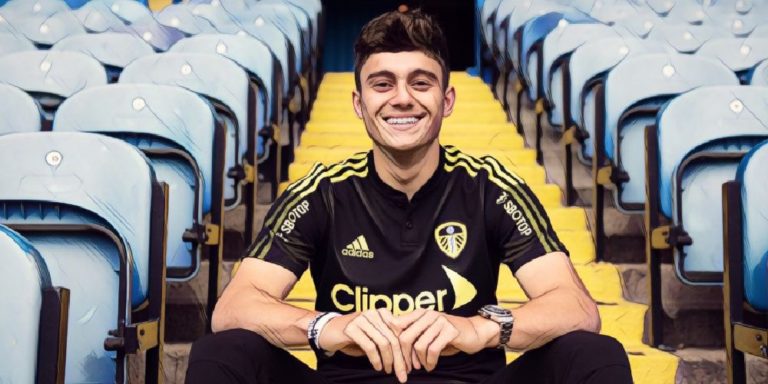 Daniel James has opened up on his excitement to get going with Leeds and work with Marcelo Bielsa, admitting he started playing ‘safe’ during his time at Manchester United.

James completed a move to Leeds on deadline day in a deal that could be worth around £30m, the winger having struggled for regular minutes at Old Trafford and pushed further down the pecking order by the arrivals of Jadon Sancho and Cristiano Ronaldo.

The Wales international started brightly following his move to Manchester two summers ago, but he admits his natural game was impacted towards the end of his time with the Red Devils.

“I think everyone goes through part of their career where you don’t realise something is happening until you look back and have good people around you to analyse that,” he told The Telegraph. “I started thinking, ‘What does he do that I can do?’ rather than thinking just about my game and being myself. It got to the point where I was being a bit safe in games.

“I got bought for my direct play, running in behind, running with the ball, trying things and not being afraid to lose the ball but slowly I started to come away from that and play a little safe.

“When I stepped back it was remembering to be direct, to be that person. Safe is dangerous in the position I play. You’re not there to do that – you’re there to score goals and make assists and run yourself into the ground on and off the ball.”

James has been a long-term target for Leeds and came close to signing for the club two-and-a-half years ago, with Marcelo Bielsa having retained his interest in adding the 23-year-old to his attacking options.

James admits he can’t wait to introduce himself to the fans ahead of his weekend’s clash with Liverpool, recalling the unique ovation he received from the Elland Road crowd despite the collapse of his previous move to Leeds.

“Two and a half years ago I nearly signed for the club and a couple of weeks later I played there with Swansea and had goosebumps that day because I’ve never experienced in a game someone chanting an opposition player’s name,” he recalled.

I always wore the @ManUtd shirt with honour and pride.

Thank you to everyone at the club who I have worked with over the last 2 years.

I’ve made fantastic friends and memories, but now is time to move on to the next step.

All the best for the future! pic.twitter.com/vnSBDRekwS

“It was a moment where you’re almost floating above your body and thinking ‘Is this actually happening?’. I remember coming off and getting a bigger applause than when [the Leeds striker] Patrick Bamford came off soon after.

“So going through that, having been on the other team then, it’s going to be great to see what it’s like now I’m actually playing for Leeds. I can’t wait to be at Elland Road.”

James also discussed the prospect of working under Bielsa, who boasts a reputation as one of the most demanding managers in world football.

The summer signing believes Bielsa’s style is suited to his strengths and says he is looking forward to improving and learning under the Argentine’s management.

“It’s great for him to still believe in me after two and a half years,” he said of the Argentine. “I’ve spoken to Tyler (Roberts) to get a bit of insight and I’m trying to do as much research while I’m away to get an insight into how players in my positions play and what actions they make. I think you always want a little bit of insight before you go in about how things work but everyone knows from the outside that it’s hard work.

“But you’ve seen with the players he’s had over the years how much he’s improved them and that’s the thing I’m looking forward to most – seeing how he sees football. He obviously thinks I can fit in that system.

“But don’t get me wrong, I don’t think I’m going to walk into that team. Hopefully I can adapt quickly to the system but I think it’s going to take me a little while. It’s very tactical but he’s got a way of playing that I feel suits me.”

The post Dan James excited to get going with Leeds and Bielsa and admits he started playing ‘safe’ at Man Utd first appeared on The Football Faithful.