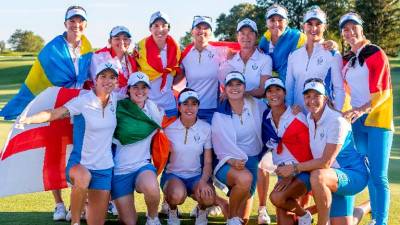 Finland’s Castren fired out of a bunker and drained her putt at the 18th to secure a 1-up victory over American Lizette Salas for the point that ensured Europe would retain the trophy it won in 2019 at Gleneagles in Scotland.

The Europeans came into final day of the biennal match-play showdown between European and US women needing five points from 12 singles matches to gain the 14 they needed to take the Cup back home from Inverness Club in Ohio.

Ireland’s Maguire – like Castren, the first woman from her country to play in the Solheim Cup – fittingly delivered Europe’s first point of the day with a dominant 5&4 victory over Jennifer Kupcho.

Maguire, who had already partnered to deliver 3½ points over the first two days, seized the lead with an eagle at the par-five second and never looked back.

“Just so proud of getting 4½ points on the board for Europe,” said Maguire, who became just the third player to earn 4½ or more points in the Solheim Cup.

Castren knew the stakes were high when she took a 1-up lead to the final hole, and she was elated after getting the job done.

“It’s hard to put it into words,” she said. “Right now I’m shaking. I was looking at the scoreboard and I knew it was going to be an important putt. We read it perfectly and it went in. I’m just so happy now.”

Europe’s players – who because of coronavirus travel restrictions played in front of an overwhelmingly pro-American crowd – were able to celebrate in full after Emily Pederson completed her 1-up victory over Danielle Kang in the final match to seal the outright win. – AFP