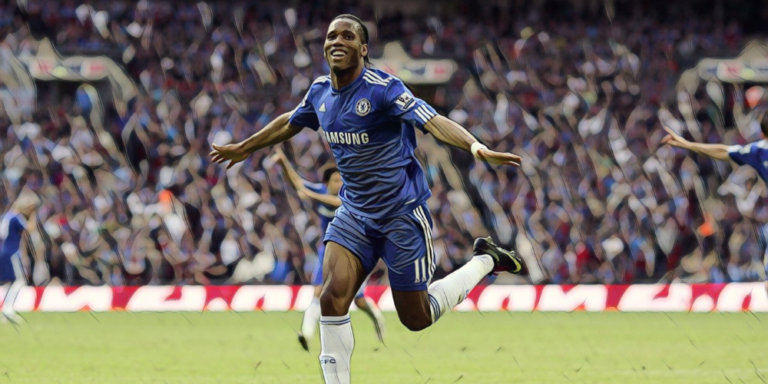 Didier Drogba was arguably the most complete centre-forward in European football at his best, a signing who redefined expectations for players in his position.

Unplayable during his finest seasons at Chelsea, the Ivorian was a forward who occupied backlines singlehandedly, a freakish force of Herculean strength, physicality, and goalscoring prowess.

Central to Chelsea’s emergence as a footballing superpower, billionaire backing had seen a raft of exciting imports arrive at Stamford Bridge, but perhaps none matched Drogba’s lasting legacy in the capital.

The summer of 2004 was the period in which Roman Abramovich’s revolution truly hit overdrive, as Claudio Ranieri’s near misses the previous season proved fatal and a fresh-faced Jose Mourinho swaggered into office.

Mourinho had guided Porto to a shock Champions League triumph the previous season and was football’s hottest managerial property, the cocksure coach immediately investing the Russian’s riches on a squad overhaul.

In came Ricardo Carvalho and Paulo Ferreira from Porto as Mourinho turned to familiar faces, whilst PSV Eindhoven duo Mateja Kezman and Arjen Robben reunited at Chelsea after forming a fine understanding in the Eredivisie.

What proved to be the key addition however was Drogba, a powerhouse player who had shot to prominence following a spectacular season at Marseille.

Drogba scored 32 goals in all competitions as Marseille reached the UEFA Cup final, scoring decisive goals as Liverpool, Inter Milan and Newcastle were all eliminated on route to the showpiece.

Drogba was raw and relatively untested at the highest level, but Chelsea had unearthed a footballer who would have a transformative impact upon their fortunes.

His first season saw the Ivorian contribute 10 league goals as Chelsea were crowned champions, ending a 50-year wait for title success as their new-look side conquered the Premier League.

Drogba’s ability to operate as a one-man forward line allowed a midfield three to dominate fixtures, as Mourinho’s side moved away from English football traditions of two-man partnerships in attack.

The trophies continued to flow across the following seasons, with Drogba’s blend of attributes contributing to the end of an era in which goals were the sole standard on which strikers were judged.

His goal record had been modest across his first two seasons in England, but a haul of 20 league goals in 2006/07 earned Drogba the division’s Golden Boot and showcased his true potential.

For all of the accolades won and match-winning moments in the previous seasons however, it was the arrival of Carlo Ancelotti ahead of the 2009/10 campaign that truly elevated Drogba to his unstoppable, unplayable best.

An indifferent period in the post-Mourinho era saw Abramovich turn to the experienced Italian, his task simple – to win and to win in style.

Ancelotti has forged a fine reputation for managing illustrious names throughout his year and his debut season at Stamford Bridge ensured Chelsea’s collection of stars all sang from the same hymn sheet.

Drogba ensured the Ancelotti era got up and running with a brace on the opening day of the season, scoring twice as Chelsea came from behind to snatch a late win against Hull in the capital.

His first – a dipping free-kick from distance – levelled the scores before the break, before an exquisite chipped finish from an acute angle snatched a stoppage-time win for the hosts.

Clinching it with a dink

Some @didierdrogba deftness for #GoalOfTheDay

Chelsea opened the season with six successive wins and the imperious Ivorian was the catalyst behind their charge, netting five goals including a lashed left-footed finish at Stoke.

September’s showdown with Spurs saw Drogba demonstrate the searing pace and power that left defenders terrified, leaving Vedran Corluka in his wake before swatting aside the Croatian’s challenge to seal a 3-0 win.

Drogba’s goals were married to a considerable number of assists as his selfless style shone, with the forward failing to provide a direct goal involvement in just one of Chelsea’s opening 11 fixtures of the Premier League season.

Ancelotti’s free-scoring side began to accelerate away in the title race and it was champagne football on occasion by Chelsea, a goal at Bolton seeing Drogba cap a wonderful and inventive one-touch move involving Deco and Frank Lampard.

Having found success with a pragmatic approach previously, Chelsea were cantering onwards with one of the most fun-filled sides of the Premier League era.

Arsenal felt the full force of a player operating at the peak of his considerable powers in October, the Emirates left silenced and stunned as Drogba ran riot.

He broke the deadlock shortly before the break after opening his body to turn home Ashley Cole’s cross in emphatic fashion, before a sensational set-piece from distance moved the league leaders 11 points clear of their London rivals.

A man who loved a goal against Arsenal: @didierdrogba.

There was an inevitable menace whenever Drogba faced the Gunners, his devastating derby double enhancing his record to 10 goals in just nine appearances against Arsenal.

Drogba’s unrivalled ability to deliver when it matters most helped forge his Chelsea legend and he finished the campaign with away goals at Arsenal, Liverpool and Manchester United, each contributing to three points at some of the Premier League’s most daunting venues.

That latter goal saw Drogba come off the bench to score a crucial – if contentious – second at Old Trafford, a goal that allowed Chelsea to leapfrog their opponents in the title race and swing the Premier League pendulum back in their favour.

The high-octane spearhead of the west London side’s championship charge was ably supported by Nicolas Anelka, Florent Malouda and Frank Lampard, the latter enjoying his most productive goalscoring campaign after netting an astonishing 27 goals across all competitions.

It was Drogba however, who commanded a status as the league’s leading light.

Drogba was an unruly scourge of Premier League backlines, a hulking specimen with minacious intent when it came to dismantling defences.

Far from the proverbial school-yard bully however, he was intelligent in his movement and possessed a touch and technique that ensured he compiled a catalogue of spectacular strikes.

He was, in essence, a forward capable of it all.

His dribbling stats rose markedly following a disappointing 2008/09 campaign the previous season, as he regularly picked up possession and veered towards goal as a whirlwind of pace and power.

Chelsea’s prolific campaign saw Ancelotti’s side become the first in Premier League history to reach a century of goals in the division, their total of 103 goals since bettered by only Manchester City’s 2017/18 vintage.

The west Londoners scored seven goals on three occasions and eight during a final day thrashing of Wigan, as Drogba scored a hat-trick to claim the Premier League’s Golden Boot and ensure his side were crowned champions by just a single point.

@didierdrogba scored a hat-trick as @ChelseaFC clinched their third #PL title with an 8-0 win#OnThisDay in 2010… pic.twitter.com/GGVMYimW2F

Drogba’s 29 league goals saw him become the first Chelsea player in a decade to finish as the league’s leading scorer, whilst his 37 goals in all competitions set a new club record.

That haul is all the more remarkable given it came in just 31 starts and consisted of just one penalty, with Frank Lampard’s designation of spot-kick duty preventing Drogba from sending further records tumbling.

The 37th goal also proved the decisive one as FA Cup success and a domestic double was secured against Portsmouth at Wembley, continuing Drogba’s extraordinary record in cup finals and capping a season that should be remembered as anything but ordinary.

Drogba’s match-winning efforts in the Champions League final two seasons later are perhaps the defining imagery of a Chelsea career with no shortage of highlights, but the 2009/10 campaign is the season in which the irresistible Ivorian proved impossible to tame.

Read – Unstoppable: Some of Drogba’s greatest headed goals for Chelsea

The post Remembering just how unplayable Didier Drogba was for Chelsea in 2009/10 first appeared on The Football Faithful.