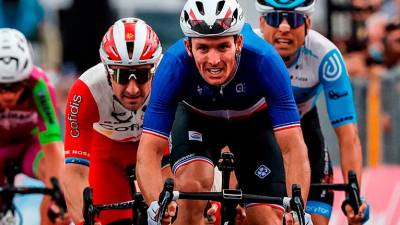 ITALY: Frenchman Arnaud Demare won a photo-finish sprint for the fourth stage of the Giro d’Italia on Tuesday, with Portugal’s Joao Almeida holding onto the leader’s pink jersey as Welsh contender Geraint Thomas withdrew through injury.

Groupama-FDJ rider Demare pipped Slovak Peter Sagan and Italy’s Davide Ballerini in a thrilling battle to the line after the 140km ride from Catania to Villafranca Tirrena, the last stage in Sicily before the race heads for mainland Italy.

Almeida, riding for Deceuninck-Quick Step, bagged two bonus seconds in an intermediary sprint to pull ahead of Ecuadorian Jonathan Caicedo in the overall standings.

Thomas, the 2018 Tour de France champion, was forced to withdraw before the start of the stage after fracturing his pelvis in a heavy fall on the third stage.

For 29-year-old Demare it was a second stage win after last year in his fourth Giro participation.

The French champion now counts 72 career wins including 11 this season.

Wednesday’s fifth stage moves to Calabria in the foot of Italy, covering 225km from Mileto to Camigliatello Silano. – AFP