Wackerman out of Giro following freak crash caused by helicopter

Wackerman out of Giro following freak crash caused by helicopter 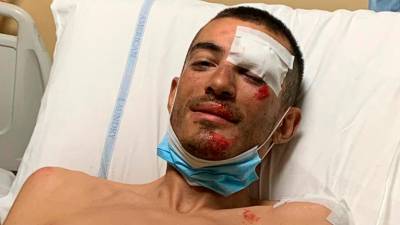 ITALY: Italian Luca Wackermann (pix) was forced to withdraw from the Giro d’Italia with multiple injuries following a big crash in Tuesday’s fourth stage caused by a low flying helicopter.

The crash, which brought down Wackermann and Dutchman Etienne van Empel of the Vini Zabu-KTM team, happened at the end of the stage when a barrier was blown over by the draft from the helicopter and struck the two riders.

A statement from the Italian team said Wackermann, 28, had suffered concussion due to a head injury, as well as a fracture of the nasal bones, multiple contusions to the face, on the chin and on the right knee.

He also sustained multiple bruises to his arms and legs and a suspected back fracture.

“Wackermann will spend the night in the hospital kept under observation and losing that chance to live a dream vanished because of an episode that could have brought some heavier consequences,” added the statement. – Reuters

SASSUOLO, Djuricic: “This club is going to play Champions League”