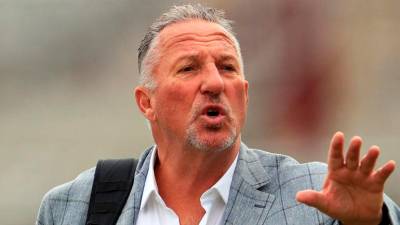 LONDON: Ashes hero Ian Botham (pix) has questioned England players’ desire to confront the “ultimate test” of touring Australia as cricket chiefs try to hammer out an agreement to allow the trip to go ahead.

England are due to play a five-Test series starting in Brisbane on Dec 8 but concerns over player welfare and Australia’s strict coronavirus restrictions have plunged the tour into doubt.

Players are understood to harbour fears over quarantine, bubble environments and access for families, with even captain Joe Root refusing to commit so far.

The England and Wales Cricket Board will meet this week to decide whether the Ashes can go ahead, with reports suggesting there have been positive talks with Cricket Australia.

Botham, who triumphed in multiple Ashes campaigns and is recognised as one of England’s greatest players, questioned the mentality of the current crop of cricketers.

“I start to wonder maybe if some of these guys don’t fancy the ultimate test,” the 65-year-old former all-rounder wrote in The Daily Telegraph.

“You have to worry about it. To play Test cricket for England is the ultimate and to play against Australia in Australia, and win, is magnificent.

“Australia don’t lose very often in their own backyard. It’s a challenge and if I was in their boots, I’d already have my bags packed.”

Australia has largely sealed its borders to international travellers during the Covid-19 pandemic but Prime Minister Scott Morrison said it would be “flexible and practical” over the tour.

Multi-format England players potentially face months of travelling and living in biosecure bubbles. The T20 World Cup in the United Arab Emirates and Oman starts on Oct 17 before the Ashes series in December and January.