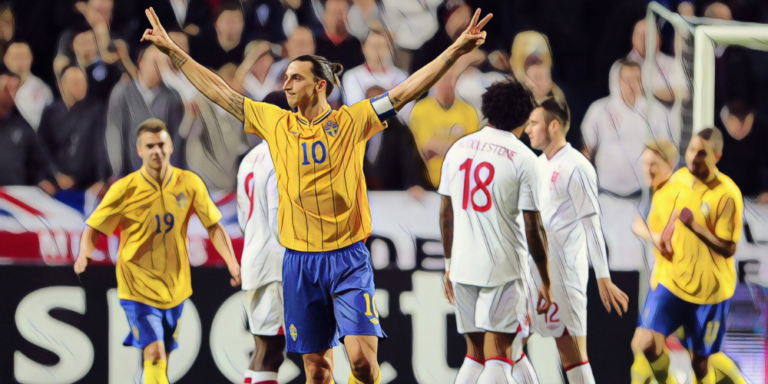 Zlatan Ibrahimovic has been an unmistakeable presence in football since the turn of the century, often brash and brilliant in equal measure.

Ibrahimovic’s extravagant arrogance has seen him loved and loathed amongst football fans, the undeniable size of his talent matched only by that of his own ego.

English football fans have often had their feathers ruffled by public demonstrations of inner-confidence, with self-promotion and praise not easily accepted.

Ibrahimovic’s exploits at some of European football’s grandest institutions had done little to improve public perception of the forward in England, with doubts persisting over whether the Swede was indeed amongst the elite company he claimed to be – even with league winners’ medals from the Netherlands, Italy and Spain in his possession.

His modest record against English opposition in continental competition had added fuel to the fire that he was – whilst talented – a level or two below the world’s very best.

Those perceptions were ended emphatically following one iconic performance in November 2012.

Roy Hodgson’s England travelled to Sweden to face the Scandinavian side in a friendly fixture to celebrate the opening of Stockholm’s Friends Arena.

The two teams had met just months earlier at Euro 2012, with the Three Lions edging a thrilling group game 3-2 as Danny Welbeck scored a late winner for Hodgson’s charges.

England named three debutants in their starting side for the friendly – including Raheem Sterling and the 31-year-old Leon Osman – and introduced three more from the bench, but an evening in which Steven Gerrard celebrated his 100th cap for the visitors belonged to just one man.

Ibrahimovic fittingly scored the first goal at the new stadium inside the opening 20 minutes, reacting quickest after debutant Steven Caulker had blocked his initial shot to prod a finish high into the roof of the net.

England rallied after falling behind and headed into half-time ahead, first Welbeck turning home Ashley Young’s cross to level, before Caulker met Gerrard’s free-kick to net a debut goal for the Three Lions.

Those inside the ground had witnessed nothing out of the ordinary as the referee paused proceedings for the interval, whilst the opening exchanges of the second half also passed with little incident.

The final quarter of an hour, however, saw Ibrahimovic stun England and silence his doubters.

The Swedish superstar netted a wonderful equaliser after freeing himself from Gary Cahill’s attentions, cushioning Anders Svensson’s through ball over the top on his chest before lashing home a volley beyond Joe Hart.

Ibrahimovic’s goal moved him level with Henrik Larsson in Sweden’s goalscoring charts, but the best was still to come from the nation’s mercurial number ten.

Seven minutes later and with the home crowd hushed in anticipation, Ibrahimovic lashed home a 30-yard free-kick which bounced and skidded off the turf and into the net – the Sweden supporters almost raising the closed roof of their newly-opened footballing home.

Ibrahimovic had turned the contest on its head with two moments of individual brilliance, becoming the first player since Marco van Basten at Euro ’88 to score a hat-trick against England.

Even those goals, however, were soon to be upstaged by a moment of outrageous audacity.

As the game ticked into stoppage time, a hoisted ball forward is pursued by Sweden’s hat-trick hero, though he is second in the race as Hart leaves his area to head the ball clear.

The goalkeeper’s header was short, providing Ibrahimovic with an opportunity to produce a piece of improvised ingenuity as good as any seen in the modern era.

The 6ft 5in frame of the Swedish star defied gravity as he launched himself acrobatically into the air, connecting with the dropping ball to launch a bicycle kick back towards Hart’s gaping goal.

It was a moment of absurd audacity and athleticism, the crowd taking a collective inhale of breath in disbelief as the forward executed an extraordinary overhead kick for his fourth goal of the evening.

#OnThisDay in 2012, Zlatan Ibrahimovic did something which, let’s face it, only he can do. That thirty-odd yard overhead kick against England. Sizzled Joe Hart’s brain in his head like it was a fried egg. Sensational. pic.twitter.com/Wj7vmmBB8n

Ibrahimovic’s hat-trick had been impressive enough, but the masterpiece of his performance converted any doubters into genuine believers.

Two years before his four-goal destruction of England in Stockholm, the forward gave the English press a defiant answer when questioned on his doubters.

Fast forward to November 2012 and there were few questioning the quality of Sweden’s enigmatic talisman, with Ibrahimovic refusing to miss the chance to send a jibe in the direction of those who had dared question the hype.

“As always in England all the media were against me,” he said.

“There was all that talk: he doesn’t score against English teams.

“I remember Lionel Messi before the 2009 Champions League final for Barcelona. Then he scored against Manchester United and suddenly he was the best player in the world. Maybe now they’ll say something like that about me.”

Awarding Zlatan the honour of best player in the world was a bridge too far for the English media, though the Swede’s showing was one that altered perceptions and emphatically demonstrated why he was so highly regarded on the continent.

Having conquered almost each of Europe’s major leagues with trophy-laden spells at Ajax, Juventus, Inter Milan, Barcelona, Milan and Paris Saint-Germain, the forward eventually moved to the Premier League to sign for Manchester United on a free transfer in 2016.

Doubts circulated once more given his advancing years, but even a 35-year-old Ibrahimovic showed he was still a cut above most players.

He scored 28 goals in all competitions and won both the League Cup and Europa League, but a serious knee injury curtailed his first campaign and proved the start of the end of his time at Old Trafford.

As Ibrahimovic celebrated his 40th birthday he remains at the forefront of elite level competition, scoring prolifically for AC Milan after a short spell tormenting defences in MLS.

His persona means that Ibrahimovic will never be to everyone’s taste, but even his biggest detractors can not deny the talent of a footballer who has achieved extraordinary feats.

His four-goal destruction of England was perhaps the isolated moment that altered his legacy.

The post Iconic Performances: Zlatan stuns England and turns his critics into believers first appeared on The Football Faithful.