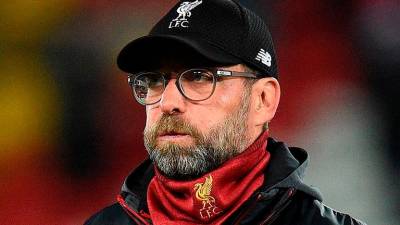 LONDON: Liverpool manager Jurgen Klopp defended Roberto Firmino’s all-round contribution to the English champions’ success in recent seasons as the Brazilian’s place in the team has come under threat from the free-scoring form of Diogo Jota.

Firmino has scored just once this season compared to Jota’s return of seven in 10 games since joining from Wolves in September.

The Portuguese international made the most of his chance to start ahead of Firmino with a hattrick in Liverpool’s 5-0 rout of Atalanta in the Champions League on Tuesday making a strong case for selection in Sunday’s crunch Premier League clash with Manchester City.

But when asked to explain the other elements of Firmino’s game that have made him a prominent part of the Liverpool sides that stormed to the Champions League in 2019 and a first league title in 30 years last season, Klopp launched a withering attack on his critics.

Firmino has scored just 13 goals in his last 63 appearances for the Reds.

“He was in so many games the difference maker, without scoring maybe, but scoring as well in other games. I would feel really embarrassed if I have to mention now the qualities of Bobby Firmino.

“I can’t help these people. Sorry if they don’t see it, I cannot help them.”

Liverpool and City have dominated the Premier League title race for the last three seasons, but both have shown signs of weakness in the early part of the new campaign.

And Klopp believes neither side will be able to set the standards of recent seasons when both have smashed their club points record tallies with a heavily congested schedule and no fans in the stands.

“It’s that early in the season and so many things are different this year, nothing is the same compared with last year or the year before,” added Klopp.

“Everything is different and we just have to make sure we get through very intense periods with the fittest players and play the best football we can.

“This is the most difficult game in the world of football I would say to play against Man City so we have to prepare for that.” – AFP