Conte’s Inter close in on Serie A title

Conte’s Inter close in on Serie A title 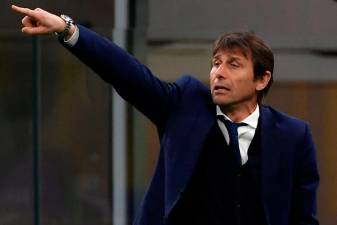 MILAN: When Antonio Conte took the Inter Milan job in May 2019, he quickly made it clear that he had little patience for the club’s long-held nickname of “Pazza Inter”.

Translating to “Crazy Inter”, it was the result of years of spectacular implosions and rollercoaster matches.

But in one of Conte’s first appearances on the club’s social media channels, he told club chairman Steven Zhang: “No Crazy Inter. No more.” He was true to his word.

Yesterday, the coach deployed a brutally efficient counter-attacking game plan to beat Sassuolo 2-1 at San Siro and move 11 points clear on top of Serie A.

It was Inter’s 10th league win in a row and left them as enormous favourites to clinch a first title win since 2009/10 and end the nine-year domestic dominance of rivals Juventus.

The “Pazza Inter” of old has occasionally reared its head this season: a 4-3 win against Fiorentina required two goals in the final three minutes, their Champions League group stage exit involved a 3-2 win over Borussia Monchengladbach and 3-2 defeat to Real Madrid, and there was a shock league defeat to Sampdoria.

But Inter have rarely resembled anything but champions-in-waiting since the turn of the year, and their remarkable recent run leaves them in a position that even the Crazy Inter teams of the past would have struggled to surrender.

No Serie A leader has ever thrown away an 11-point advantage with nine games to go, and it would take a brave person to predict anything other than another Inter victory when they host relegation threatened Cagliari on Sunday.

Conte said after recording 30 per cent possession against Sassuolo, their lowest rate since Opta started collecting data in 2004, that “our objective is so important that aesthetics come second”.

Inter fans will likely be happy to sacrifice the end-to-end encounters for the new, devastatingly clinical approach, spearheaded by a strike partnership in Romelu Lukaku and Lautaro Martinez that has scored 36 goals this season.

It might not always be pretty, but is by now almost certain that Conte will succeed in his goal of taking the crazy out of Inter.

The six-team group below the runaway leaders is involved in a thrilling race for Champions League qualification, with nine points separating second-placed AC Milan on 60 points from AS Roma in seventh with 51 points.

Juventus striker Paulo Dybala scored a superb goal on his return from injury to earn the Turin club a vital 2-1 win over Napoli in midweek, relieving some pressure on coach Andrea Pirlo following a slump in form that put Juve’s top four hopes at risk.

Milan, who travel to second-bottom Parma on Saturday, sit one point clear of Juventus and two above fourth-placed Atalanta, who are at Fiorentina.