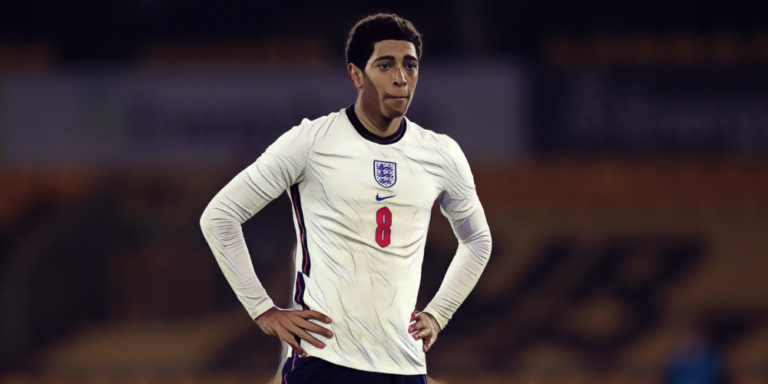 Liverpool are claimed to be ‘ahead’ of Manchester United in the race to sign Borussia Dortmund sensation, Jude Bellingham, next summer.

The teenager has enjoyed a stellar rise over the last two years, becoming Birmingham City’s youngest ever first-team player aged just 16 years and 38 days when he made his debut in the EFL Cup in August 2019,  before making his league debut 19 days later.

He went on to feature in 41 of the club’s games in the Championship that season, seeing Manchester United being strongly linked with a move for the youngster, with Sir Alex Ferguson even giving him a tour of the club’s training facilities, only for him to opt to follow the likes of Jadon Sancho with a move to Borussia Dortmund in the summer of 2020.

He would score on his Bundesliga debut and go on to feature heavily for the German side, making 46 appearances in all competitions last season – earning rave reviews from Pep Guardiola following his display against Man City in the Champions League back in April.

His performances for Dortmund also saw him earn international recognition to become the third-youngest player in England history – behind Theo Walcott and Wayne Rooney – and according to reports, is once again attracting the attentions of Premier League sides.

According to the Star, Manchester United are still interested in landing the 18-year-old as they look to strengthen their midfield, but their main attentions seem to be focussed on Declan Rice, while they are said to be planning to ‘pull out all the stops’ to sign Bellingham’s Dortmund teammate, Erling Haaland next summer.

United also appear to have competition from bitter rivals, Liverpool, with Jurgen Klopp said to view the teen as an ‘ideal’ signing as he looks to freshen up what is an ageing midfield.

The report says that Bellingham is happy in Dortmund, and ‘will not agitate for a return to English football’, though he would find the allure of Liverpool ‘hard to resist’.

The report suggests that Liverpool would have to break their transfer record to land the youngster, with a fee of £80 million suggested.

The post Liverpool ‘ahead’ of Man Utd in race to land £80m midfielder Jude Bellingham first appeared on The Football Faithful.