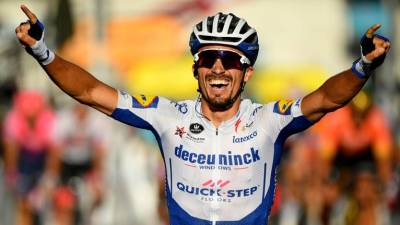 It was his first win with his world champion rainbow coloured jersey and bike after his farcical finish at Liege-Bastigne-Liege on Sunday.

“It’s not a revenge win,” said the affable Frenchman. “It’s just great to get a win in this,” he said pointing to the jersey he will wear for a year.

At Liege Alaphilippe had raised his arms in celebration way too soon and was pipped embarrassingly on the line after stopping peddling.

“I won’t sleep a wink tonight,” said Van der Poel. “I made a slight mistake and was so stunned I stopped pushing for a moment.”

Alaphilippe said he had signed up for the race late.

“I’m very happy I came,” said the world champion, “I only came because the Amstel Gold was cancelled.”

Alaphilippe’s next target comes as the Belgian classics season reaches its apex Oct 18 as much of the nation grinds to a halt to watch the Tour of Flanders at huge all-day parties. – AFP