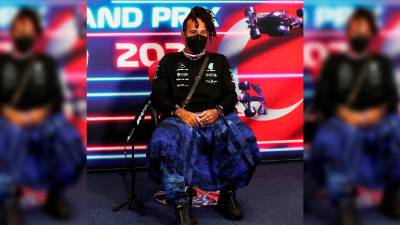 ISTANBUL: Lewis Hamilton (pix) demonstrated his love of fashion on Thursday by wearing a bold blue kilt for his news conference ahead of this weekend’s Turkish Grand Prix.

It was a notable departure from Mercedes’ usual corporate uniforms and an endorsement of the role fashion plays in enabling the British seven-time champion – dressed this time by Burberry – to escape the pressures.

“I love being able to separate from the sport,” he said. “The intensity of this whole season is difficult for everyone that’s at the track and so to be able to have something else – another outlet, something else that you can focus on – helps take the weight off of it.

“And so when I come back, it always feels fresh when I come to a Grand Prix because it’s not something I’ve been thinking about every day…”

Since scoring his 100th victory by winning the Russian Grand Prix two weeks ago, Hamilton said he had “blown off steam” by attending fashion shows in Paris. In September, he hosted a table for young black designers at the Met Gala in New York.

“I love the fashion scene,” Hamilton explained at the Istanbul Park circuit. “When you’re in a fashion week, for example, you’re surrounded by people from all different walks of life, expressing themselves in different ways.

“I love that environment where I’m able to be able to express myself.”

He conceded that wearing a kilt in the paddock was “quite daring”, adding “Formula One’’ not focused on fashion… It’s obviously very corporate and there is actually no fashion in F1.”

Turning his attention to his enthralling title duel with Red Bull’s Max Verstappen, in which he holds a two-point lead, he echoed the Dutchman’s comments about shrugging off the pressures.

“What an amazing season it has been so far,” he said. “It’s been super exciting for the fans… We finally see two teams neck and neck, which is amazing and, of course, we want to win, but you’ve got to learn to let that not overtake everything in your life.”

Hamilton played down the prospect of taking a grid penalty for a new fourth power unit this weekend, as Verstappen did in Sochi where he raced from the back of the grid to finish second.

“At the moment, I still have (engines) number two and three,” he said. “I don’t envisage us taking another at the moment, but that could change.”

Last year in Turkey, Hamilton struggled in qualifying and was only sixth on the grid, but produced his most spectacular victory of the season to clinch his seventh drivers’ title in torrential rain.

“It was a challenging weekend as a team so to come out on top, with no real mistakes in the race, it was an emotional time,” he said. – AFP