Ziyad’s issue: Probe expected to be completed by end of October

Ziyad’s issue: Probe expected to be completed by end of October 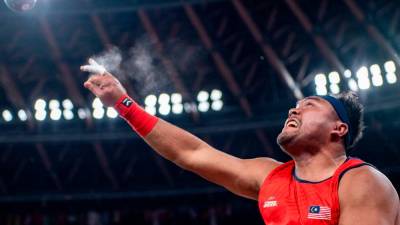 KUALA LUMPUR: The internal investigation into the disqualification of national shot putter Muhammad Ziyad Zolkefli in the F20 (intellectual impairment) category at the recently-concluded Tokyo Paralympics is expected to be completed by end of this month.

However, the internal investigation committee chairman, Tan Sri Borhan Dolah hoped that the probe could be completed sooner.

Borhan, who is also the former Public Service Department director-general, said all 10 individuals identified, including Muhammad Ziyad, his coach Mohd Faizol Harun and Paralympic Council of Malaysia (PCM) president Datuk Seri Megat D Shahriman Zaharudin, were expected to be called up to attend the committee’s meeting at the Youth and Sports Ministry (KBS) in Putrajaya on Monday and Tuesday (Oct 11 & 12).

“I can’t guarantee that the investigation will end next week, but it is likely to be 80 to 90 per cent completed, with the balance depending on whether any other individuals need to be called up or not. It may be resolved by the end of this month.

“The call list may have more than the 10 individuals identified, so far. However, it depends on those asked to attend to inform us if there are others who could assist in our investigation and if we should call them up as well,” he said when contacted by Bernama today.

He said the committee, which met for the first time at the National Sports Council in Bukit Jalil on Tuesday (Oct 5), discussed the strategy and scope of the investigation as well as identifying the individuals required to attend the meeting in a bid to find out what exactly transpired on that fateful day at the Tokyo Olympic Stadium.

Asked if he had seen the closed-circuit television (CCTV) recording at the stadium regarding the incident, he said that he had yet to do so as the committee was still waiting for the video clip.

Meanwhile, Borhan assured that their investigation was free from interference, including the KBS, in determining the recommendations or actions that must be taken to resolve the issue.

“If there is a strong case saying we could have won gold, we will recommend the measures that the KBS can take.

“Otherwise, we will propose improvements that can be made for the national contingent to ensure that such incidents do not recur… it’s up to the KBS to decide on the next course of action, including whether or not to take the matter up with the Court of Arbitration for Sports (CAS),” he said.

However, he stressed that any findings from the investigation would be kept secret and handed over to the KBS, adding that he would then meet its minister, Datuk Seri Ahmad Faizal Azumu to explain the details of their investigation.

He was classified as Did Not Start (DNS) following a protest lodged by Ukraine, who claimed that Muhammad Ziyad was late to enter the call room.

Maksym was announced as the gold medallist with a throw of 17.34m, breaking Muhammad Ziyad’s world record of 17.29m that he had set at the 2017 World Para Athletics Championships in London.- Bernama