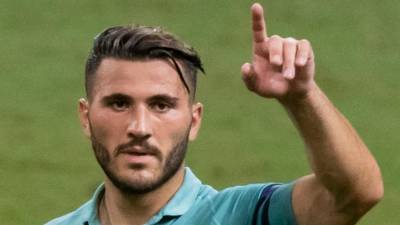 BERLIN: Bundesliga bottom side Schalke welcome back Arsenal loanee Sead Kolasinac (pix) on Saturday in their desperate bid to avoid a league-record equalling 31 games without a win.

Having joined Arsenal in 2017, Kolasinac, a product of Schalke’s academy, returns on loan until the end of the season to help the club fight relegation after nearly thirty consecutive years in Germany’s top flight.

Their last league win was in January 2020 and failure to beat Hoffenheim at home will see Schalke equal the record of Tasmania Berlin, who went 31 games without a win during their single, disastrous Bundesliga season in 1965/66.

“No one should be afraid of this challenge,” demanded Kolasinac, who made 123 appearances for Schalke from 2012 until 2017.

“I have a strong back, but I can’t carry the whole load alone.

“We all have to stick together. We need the fans, the whole club, the supervisory board.”

Approaching the halfway point of the season, Schalke are bottom and seven points from 15th which means guaranteed survival.

Schalke are desperate to avoid matching Tasmania Berlin, who played in the 1965/66 Bundesliga season as last-minute replacements after Hertha Berlin were thrown out for breaking salary rules.

Catapulted up from the regional leagues, Tasmania scored only 15 goals, won two of their 34 games, conceded a league-record 108 goals and were relegated in last place, never to return to the Bundesliga.

Despite winning their first game in front of 80,000 at Berlin’s Olympic Stadium, heavy defeats saw interest dwindle and just over 800 spectators turned up to one home game.

“It was a suicide mission,” Hans-Gunter Becker, who captained Tasmania in 1965/66, told AFP subsidiary SID.

“We also had 800 spectators for one game, a record that will never happen again, unless you include the coronavirus era, but there is no need to talk about that.”

The 82-year-old still remembers the stress of being branded the league’s worst side and has sympathy with Schalke.

“I know from experience about this burden that weighs on the players,” he added.

“I would really like it if the Schalke players find it in their hearts to say ‘Let’s leave the record to Tasmania’.” – AFP