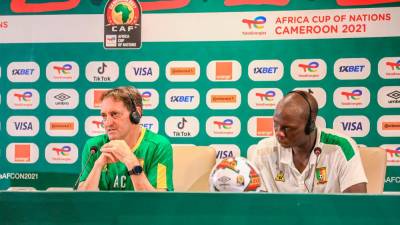 YAOUNDÉ: Fifty years after last hosting the Africa Cup of Nations, Cameroon kick off the continental showpiece today targeting a sixth title while hoping the spectre of the coronavirus does not overshadow the tournament.

Cameroon, who play 2013 runners-up Burkina Faso in their opening Group A match at the vast new 60,000-seat Olembe Stadium in Yaounde, know expectations are high for the Indomitable Lions.

However, they will have to measure up to the likes of reigning champions Algeria, the Senegal of Sadio Mane and Mohamed Salah’s Egypt.

Cameroon was initially supposed to be the host nation in 2019, before being stripped of the tournament due to delays in its preparations, with Egypt taking over. The 33rd Cup of Nations was then postponed last year because of the pandemic.

The Central African country of 27 million people was therefore determined to press on with the competition amid reports last month that leading European clubs wanted it postponed again due to Covid concerns.

This time it does go ahead, and Cameroon coach Toni Conceicao is well aware of the pressure on his side.

“It’s what they put on the table when I signed my contract: at least get to the final, do everything to win it,” Conceicao told AFP.

“We feel that the people and history of Cameroon oblige us to do it. It sets the bar pretty high, but we’re convinced we can reach these goals.”

“We’ve got a big weight on our shoulders,” added the Portuguese.

African football officials have set down tough Covid-19 rules in a bid to prevent the competition becoming a super-spreader event, requiring teams to play even if just 11 players are available.

Gabon star Pierre-Emerick Aubameyang was forced to isolate in his hotel after testing positive on Thursday, while Senegal, Africa’s top-ranked national team, travelled to Cameroon without three members of their squad for the same reason.

Senegal then had key defender Kalidou Koulibaly test positive shortly after their arrival.

“It’s a scandal, we cannot be deprived of first team players 24 hours before the match,” said Traore.

“The authorities must review the organisation.”

Covid, though, is far from the only concern in a country dealing with a conflict in the English-speaking west.

Matches in Group F, featuring Tunisia, Mali, Mauritania and Gambia, are due to be played in Limbe, a coastal city close to Mount Cameroon which is also a hotspot of separatist unrest.

Jihadist raiders also pose a problem in the north, at least beyond the city of Garoua where Salah’s Egypt and Nigeria will play group games.

It is because of the health crisis that organisers have capped crowd limits at 60 per cent of capacity, or 80 per cent when the hosts play.

Spectators must be vaccinated and have a negative test result, but only six per cent of the adult population is inoculated.

Cameroon, though, is football mad and many fans will be desperate to attend games in a country that has only hosted the Cup of Nations once before, in 1972 when there were just eight participants.

However, the nation that gave the world the likes of Roger Milla and Samuel Eto’o — the latter now president of the Cameroonian Football Federation — no longer boasts the same level of stardust.

They have Ajax goalkeeper Andre Onana and Bayern Munich striker Eric Maxim Choupo-Moting, but the real superstars of the continent will be elsewhere.

Holders Algeria, unbeaten in 33 competitive games, will be led by Manchester City’s Riyad Mahrez, while Morocco have PSG full-back Achraf Hakimi and Sevilla goalkeeper Yassine Bounou, amongst others.

Nigeria, meanwhile, cross the border without Napoli striker Victor Osimhen, or Watford’s Emmanuel Dennis, whose club said they received notice of his call-up too late.

In any case this Cup of Nations is not just about the big names, as Gambia, ranked 148th in the world, and the Indian Ocean island state of the Comoros make their debuts. — AFP