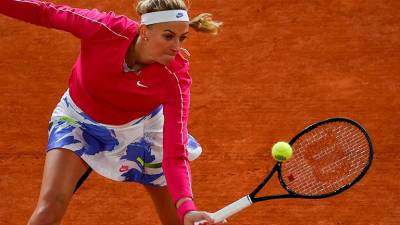 PRAGUE: Two-time Wimbledon champion Petra Kvitova (pix) said Tuesday she could see a “good chance” of recovering from an ankle injury in time for the London Grand Slam.

The world No. 12 pulled out of the French Open last week after tearing a ligament in her left ankle in a freak accident as she walked out of a TV studio in Paris.

“I probably won’t manage the Berlin tournament starting on Monday. But we are also looking at Bad Homburg, a new tournament in Germany, and that’s fifty-fifty.”

The maiden edition of the grass court tournament in central Germany takes place between June 20-26. Wimbledon starts on June 28.

Kvitova has had little luck with injuries during her career, having missed five months after being injured in a knife attack at her home in 2016.

The 31-year-old Wimbledon champion from 2011 and 2014 said she had taken off her ankle brace on Monday and was ready to resume light training on Wednesday.

Last year, the All England Club remained closed over the coronavirus pandemic.

“That was a real upset. I remember I shed a tear or two,” said Kvitova.

“I can’t imagine not playing Wimbledon for three years. I think I’ll make it, that’s why I also withdrew from Paris, I was being careful.”

“I remember 2009 when I played with an injured right ankle in Paris and it ended really badly, it took me a long time to recover. So I didn’t want to run the risk,” she added.

“It will be a different Wimbledon this year, because we’ll be staying in a hotel in the centre, 45 minutes from the courts. We’ll be in a bubble again. But there will be an audience, which is good.” – AFP