Farah Ann dreams of having own academy

Farah Ann dreams of having own academy 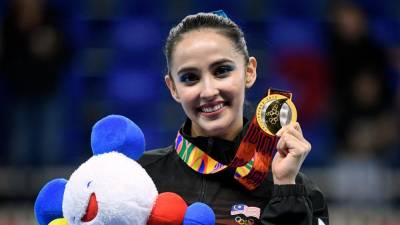 PUTRAJAYA: National gymnastics queen, Farah Ann Abdul Hadi has a dream to open her own academy after retiring from the world of sports one day.

Farah Ann said the academy was part of her plans to empower talent at the grassroots level in an effort to ensure the country did not run out of back up gymnasts.

“The Farah Ann Academy is one of my dreams one day, maybe I plan to set it up in five to 10 years from now.

“Apart from setting up a good academy, I also want to organise gymnastics programmes or camps for children in the future,” she told reporters today.

She said this after attending the National Sports Day (HSN) 2021 celebration, here.

Meanwhile, the 27-year-old is also interested in becoming a competition juror or venturing into the field of communication after saying goodbye to her favourite sport.

Commenting on the RM10 million allocation for the successful implementation of the Women in Sports Action Plan, Farah Ann praised the government’s initiative in encouraging women to venture into sports in the future.

The Selangor-born gymnast also believes that the plan will be able to raise the concept of equality in terms of gender so that women can participate in driving the country’s sports industry.

The plan launched by Prime Minister Datuk Seri Ismail Sabri Yaakob at the opening ceremony of the HSN 2021 celebration, outlines the objectives, strategies and initiatives planned towards empowering women’s involvement and participation in various sports towards making the country’s sports development more inclusive and balanced. .- Bernama