Iconic Duos: Chelsea’s impregnable pairing made of steel and silk, Terry and Carvalho

Iconic Duos: Chelsea’s impregnable pairing made of steel and silk, Terry and Carvalho 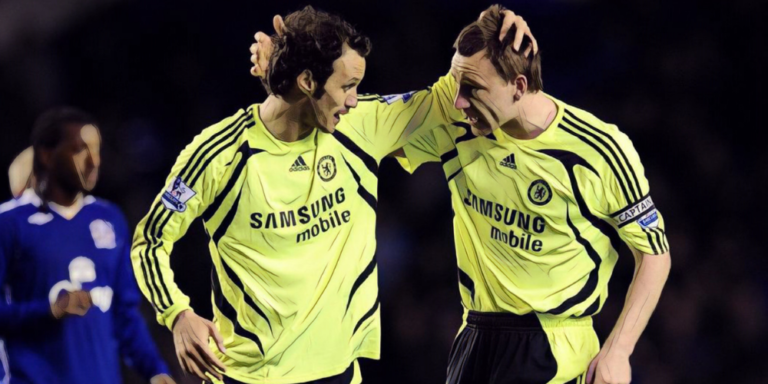 Chelsea’s drought-breaking title success in 2005 was built on a defence as impregnable as any in recent memory, a championship coronation for the watertight west London side.

Jose Mourinho’s arrival as manager is widely viewed as the catalyst behind Chelsea’s ascent to the top table of European football, the marquee man to oversee the billionaire investment of Roman Abramovich.

Claudio Ranieri had lasted just a single season under the Russian owner’s regime, learning quickly that expectations had shifted around Stamford Bridge.

In waltzed Mourinho, the cock-sure coach who had just guided unfancied Porto to a shock Champions League triumph, his winners’ medal still gleaming as he made himself comfortable in office at Chelsea.

Runners-up in the Premier League and semi-finalists in Europe the previous season, an already solid foundation needed an added layer of quality as Chelsea sought to conquer both at home and abroad.

Amongst Mourinho’s options upon arrival was John Terry, the academy graduate who had risen through the ranks to become a mainstay in the side.

Recognising the talent of Terry – who had impressed for England at Euro 2004 in the absence of the suspended Rio Ferdinand – Mourinho anointed the centre-back as club captain following the departure of Marcel Desailly.

Terry had all the attributes to lead the revolution of the ‘Special One’, a domineering presence and the bravery that had been hallmarks of English central defenders across past generations.

What he needed, however, was the perfect partner.

Porto’s success in the Champions League proved both their zenith and start of their demise, as European football’s biggest vultures circled for their prized possessions.

The jewel in the crown, Deco, turned down Chelsea’s advances for Barcelona, but Mourinho was successful in his bid to unite with defensive duo Paulo Ferreira and Ricardo Carvalho in west London.

Carvalho had been courted by some of the continent’s giants, having been named as UEFA’s Best Defender during the 2003/04 Champions League campaign, before earning inclusion in Euro 2004’s Team of the Tournament.

His arrival was a significant coup even given the resources available to Chelsea and after an initial period of adaptation cemented his status as Terry’s centre-back partner.

A rock at the

It was a partnership that had it all; power and pace, anticipation and aggression. The pairing ensured Chelsea’s goal became the Premier League’s most impenetrable fort.

Stamford Bridge in particular became a fortress of the most resilient standards, as sides tried and failed to make an impression against the champions-elect in the capital.

Chelsea conceded just 15 goals during the 2004/05 season to win the Premier League with a record 95 points, remaining unbeaten on home soil with just six goals conceded to visiting sides.

No side has ever conceded fewer goals on their way to winning the Premier League title and it is doubtful whether any ever will, as Mourinho’s side registered 25 clean sheets from their 38 fixtures.

There were contributors as equal to the centre-back pairing, with Petr Cech enjoying a superb debut season in the club’s colours and Claude Makelele redefining the defensive midfield position ahead of them, but the presence of Terry and Carvalho provided Chelsea with a backline nigh-on impossible to breach.

Terry was lionhearted in his approach to defending, prepared to throw himself into challenges that would make others wince just to watch, whilst Carvalho was cunning, calm and ever classy when venturing forward in possession.

The former’s performances were recognised with the PFA Player of the Year award, becoming the first defender in over a decade to be named as the Premier League’s finest footballer.

The latter’s intelligence allowed him to outwit opponents he could not compete with in strength and stature, whilst his recovery pace proved a fine asset for a Chelsea defence whose regimented resilience crushed the hope of opposition sides.

Carvalho discussed the instant understanding between the duo, admitting Terry was pivotal to his Premier League adaptation both on and off the pitch.

“There are some things you simply can’t explain,” he told FourFourTwo.

“Our connection was something else – if he didn’t clear a ball, he knew that I’d cover him and vice-versa. We complemented each other on the field.

“It’s a real privilege in football to be able to play next to a guy you fully trust, so I have to be really thankful for that. We clicked straight away – he went above and beyond to help me adapt to the English game. John was a tremendous defender, a true leader and someone whose opinion I valued a lot.”

Terry has been similarly complimentary when discussing his former teammate in the years since their heyday as Mourinho’s most trusted lieutenants, believing their Premier League record low for goals conceded could be a landmark that lasts the test of time.

“It’s one of those records that could be around for a very long time,” Terry told Sport Gazette.

“As soon as Rickie [Carvalho] came through the door, we just struck up a relationship. We complemented each other really well.”

“With certain players you just kind of hit it off, and with Rickie I certainly had that. And I knew things were going to go well. Once you play a few games and you train with top players, you realise just how good they are. I knew straight away that we had something very special.”

Chelsea’s title success paved the way for the most successful era in the club’s history, as a second Premier League crown followed in 2005/06.

Once again the side remained unbeaten at Stamford Bridge and conceded just 22 goals for the campaign, a figure that ranks equal-third amongst the Premier League’s greatest defences.

The game that clinched that crown was a 3-0 thrashing of Manchester United in the capital, with Carvalho sealing the triumph with a goal on the counter-attack, streaking forward confidently on the break before lashing home a finish more resemblant of a centre-forward.

Chelsea claimed a domestic cup double the following season, before reaching a maiden Champions League final during the 2007/08 campaign before falling to defeat to Manchester United in Moscow.

Carvalho’s contribution saw him named as the west London side’s Player of the Year in 2008, but his influence began to wane over the next two seasons despite the Blues winning a domestic double under Carlo Ancelotti in the defender’s final campaign with the club.

His departure for Real Madrid saw him reunite with Jose Mourinho for a third time and brought an end to his association alongside Terry, a formidable fuse of steel and silk which catapulted Chelsea into their most glorious era.

Terry’s exploits as club captain have ensured his status as one of Chelsea’s all-time greats, etched into the fabrication of his boyhood club as the most decorated footballer Stamford Bridge has seen.

Partnerships are only successful if both components coexist in harmony however, and in Carvalho he found the perfect partner to form the foundation of the modern Chelsea.

The post Iconic Duos: Chelsea’s impregnable pairing made of steel and silk, Terry and Carvalho first appeared on The Football Faithful.