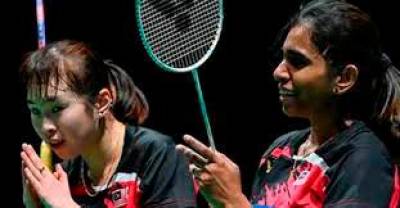 AARHUS: The Malaysian Uber Cup team might not be in full strength in the opening match against hosts Denmark today, as the main doubles player Pearly Tan has sustained a shoulder injury.

During the practice session yesterday at the Ceres Arena here, her partner M. Thinaah, 23, was seen training with team skipper and senior, Lee Meng Yean.

Speaking to the reporters after the practice session, Pearly, 21, said she sustained the injury during the recent Sudirman Cup campaign at Vantaa, Finland, and a check with the doctor after arriving in Denmark revealed that she has a minor tear in her right shoulder.

“So tomorrow I need to confirm with my coach and physiotherapist if I can play. Though I am very excited and eagerly waiting for my Uber Cup debut, I am not 100 per cent sure if I could play.

“I have to be in good form to be able to play and give the best performance. If I have not fully recovered, shouldn’t take risk and better to have someone else in the match, who can play better than me,” she said.

Malaysia are scheduled to play Denmark in the Group D match at 1.30 pm (7.30 pm Malaysian time) tomorrow, with Pearly-Thinaah, ranked 18 in the world, scheduled to meet world number 16 Sara Thygesen-Maiken Fruergaard for a first time.

Meng Yean, 27, was initially slated to try partnership with 19-year-old Go Pei Kee in the women’s team world championship following the shocking retirement of her partner Chow Mei Kuan after the Tokyo Olympics.

Meanwhile, Thinaah said she was not sure about the coaches’ decision on the line-up, but believed everyone in the team is well-prepared for the Uber Cup campaign and she is ready for the challenge.

“I am quite excited and ready for the challenge to have both Uber and Sudirman Cup debuts in the same year and to get to play against a lot of world top players, I think it is a good experience for both of us, but we still have a lot more to learn, we are still learning and hope to improve some more,” she said.

For the youngest member of the team, Siti Nurshuhaini Azman, 17, age and size is not an issue and she is very excited to show her capabilities if given the chance to play.

Badminton Association of Malaysia coaching director Wong Choong Hann said after two-day of practice session in the competition hall, the players have familiarised themselves with the venue and are well-prepared face the tournament.

“The match tomorrow is very important, we should go for a win even though the Danish players are generally ranked higher. Whatever it is, we are all fired up to show our best.

“Maybe our young players are a bit anxious but this is normal. We have told them to muster their confidence and stay focused tactically and technically,’ he said.

Malaysia will be led by 2019 SEA Games champion S. Kisona, with Eoon Qi Xuan, K. Letshanaa and Siti Nurshuhaini set to vie for the second and third singles spots, while Yap Ling-Teoh Mei Xing is another doubles pair in the team.

Malaysia’s best achievement in Uber Cup was advancing to the quarter-finals in the 2008 and 2010, while Denmark’s best ever run was 21 years ago when they clinched the silver medal.-Bernama