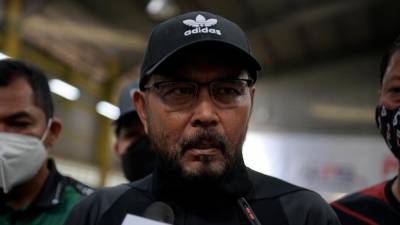 PETALING JAYA: Being a former national player alone is not enough for a person to be a coach to produce high quality footballers, said Football Association of Malaysia (FAM) vice-president Mohd Firdaus Mohamed. (pix)

Instead, he stressed that coaches not only need to explain the tactical aspects but also need to have good coaching skills as well as work hard to boost the performance of their charges.

“In the past, players did more work but now it is not like that because the coach has to work hard, for example, if a player plays as a senior defender, he has to make sure that the player really understands his role.

“I am sorry to say the basics (of players) are ‘at sea’ that’s why the selection of coaches especially in football academies needs to be thorough we want highly skilled people to teach, not just having been a national player,” he said at a press conference after a briefing for teams of the President’s Cup 2022 and the Youth Cup 2022 here today.

Not only the coach, Mohd Firdaus further stressed that team managers also need to have the basics or knowledge of football so as to be able to give insightful views to the coaches to make decisions.

“Let’s say a player often makes mistakes, the team manager can give an opinion to the coach on the selection of the player. This is not to be seen as ‘hidden hands’ but just giving an opinion because in the end it is the coach that will make the decision,” he said.

He also expressed regret that there existed interference in the country’s football arena, saying it would only destroy the sport itself in Malaysia.

“For example, there are parents at the grassroots level who are busy making sure their children get to play, sometimes they think they are smarter than the coach and push him. This should not be happening, we have to be transparent and there can be no interference,” he explained.

In the meantime, he informed that the President’s Cup and Youth Cup will adopt a format divided into three groups according to zones consisting of the south, west, north, east (including Sabah and Sarawak) and Central due to the Covid-19 pandemic that is still plaguing the country. .

He said the two tournaments will see participation of 20 teams each. — Bernama