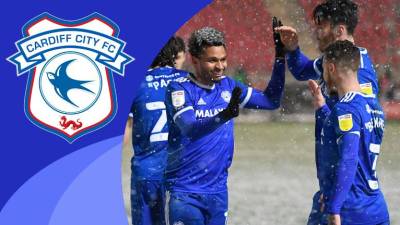 Despite being second best in the first half, Sheyi Ojo netted just before the break after a stunning breakaway against the run of play.

And it was the Millers’ turn to hit against the grain after the break when Matt Crooks turned home Michael Smith’s cross on the hour to restore parity.

As the snow sheeted down late on in the piece, all roads pointed towards a sharing of the points. But a pinpoint cross from substitute Josh Murphy found Bennett at the back post and the left-back headed home convincingly to snatch all three points for the Bluebirds.

It was a war of attrition for much of the first period, with neither side really managing to fashion clear-cut chances.

In truth, it was probably the visitors who had the lion’s share of chances, possession and territory, with the visitors’ midfield and attack not troubling the opposition defence with any regularity.

Michael Smith, in particular, proved a thorn in City’s side down the Rotherham right. The winger sent three shots at goal, on the angle, during the first period, each more troubling than the next.

The first was blocked well by Joe Bennett, the second whistled past the far post while the third, and most threatening, was denied only by a tremendous save from Dillon Phillips.

The Bluebirds’ biggest chance from the opening exchanges arguably came by virtue of a penalty shout when Joe Ralls volleyed a shot at Dan Barlaser, but the referee waved away Cardiff’s claims.

But there were more hairy moments as the half went on and it was that man Smith again who posed a real threat just after the half hour when he sent a bullet header towards goal, only for Phillips to palm over the bar with a brilliant, reactionary save.

Just as the half was drawing to a close, though, there was encouragement for City when Kieffer Moore, who had been quiet by his standards, sent a snap shot careering towards the bottom but Viktor Johansson got down smartly to deny the Bluebirds’ top scorer.

It looked as though we were heading into the break all square, however an errant pass from Rotherham on the edge of City’s box gifted possession to Harry Wilson, who needed no second invitation to slot through Ojo with a terrific 30-yard pass down the middle.

Ojo sprinted on to it and carried it with pace into the Millers’ box before coolly slotting home to hand Cardiff a shock first-half lead.

Straight after the break, Cardiff should have doubled their advantage.

Wilson’s shot from just outside the area saw the ball deflected into the path of Sean Morrison just 10 yards out from goal. The Bluebirds skipper took one look and thumped his half volley towards goal, but, almost miraculously, Johansson somehow managed to get the ball over the bar with an instinctive left-handed save. It was a golden opportunity spurned, it must be said.

That, of course, came back to bite the Bluebirds not long after when the Millers equalised.

It was that man Smith, the constant thorn in City’s side, who drilled in an exquisite cross from the byline, taking out all of Cardiff’s centrebacks, leaving Crooks with only the easiest of tap-ins to level the tie.

The weather then took a turn for the worse and the referee was forced to call for a change of ball, opting for the yellow edition rather than the white with 15 minutes to go.

Conditions got to such a point when onlookers were concerned the game might have to be abandoned, but they managed battled through.

And it was City who made the best of it.

With just five minutes left on the clock, Murphy, who, to his credit, looked lively after his introduction in the second half, cut back on to his left foot and stood a delightful ball up to the back stick for Bennett to head home.

That is now two wins and two draws in McCarthy’s short tenure so far and there is a quiet improvement, of that there is no doubt.

Importantly, though, City are gathering some semblance of momentum in a crucial part of the season.