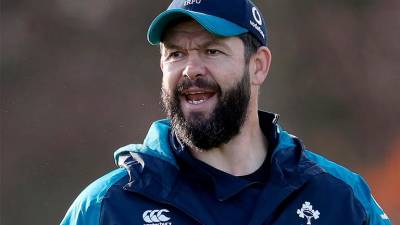 DUBLIN: Andy Farrell (pix) says his Ireland side showed enough spirit in defeat against Wales to convince him they can become just the fourth side to win the Six Nations after losing their opening game.

Ireland pushed Wales all the way in a 21-16 defeat in Cardiff on Sunday despite playing with 14 men for more than an hour.

Irish flanker Peter O’Mahony was shown a straight red by referee Wayne Barnes after he elbowed Tomas Francis in the head. He faces a ban.

But Farrell is looking ahead to Sunday’s home match against Fabien Galthie’s France, who showed signs of being the coming force in last year’s championship.

In the previous 21 years of the Six Nations, just three teams have lost on the opening weekend and recovered to win the title – England last year, Wales in 2013 and France in 2006.

“You come away with a ‘W’ (win) next week (against France) and then it’s game on,” Farrell told Irish media. “So this is it, it’s a one-off game for us.

Farrell’s team faltered in Paris last October when the title was up for grabs, losing 35-27, but they are entertaining a French side who have not won at Lansdowne Road since 2011.

“The competition is back on, isn’t it? Massively,” said Farrell.

“The Welsh will go to Scotland (who beat champions England on Saturday) and try and win there, so somebody’s record will go and it normally does that over the course of a Six Nations.

“We weren’t happy with our performance when it mattered over there in Paris, so the lads will be 100% up for the week ahead once we dust ourselves off and understand the reasons why about Sunday’s performance.”

Ireland’s lineout was vastly improved against France even though they lost the influential O’Mahony and star lock James Ryan in the first half.

Their impressive display reflected the immediate impact former captain Paul O’Connell has had made since being appointed forwards coach in January.

“The boys have been working really hard with Paul about owning that side of our game and some guys have really stepped up to the plate and took responsibility,” said Farrell.

“James Ryan, Iain Henderson and Tadhg Beirne have really ironed out a solid plan with Paul.

“That’s made our lineout certainly more solid so that’s a positive going into next week because certainly the French have got a pretty decent lineout defence as well.”

The 28-year-old, who has earned 17 Test caps but not played since the 2019 World Cup, will strengthen Farrell’s back-row options in light of the O’Mahony incident. – AFP