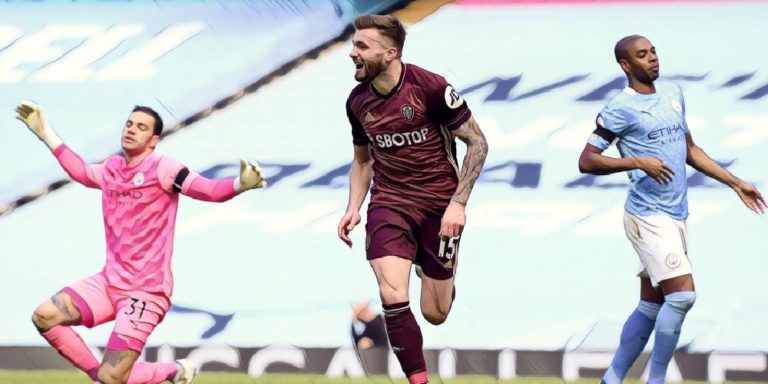 Marcelo Bielsa was full of praise for his 10-man Leeds United side after they snatched a stoppage-time winner against league leaders Manchester City on Saturday afternoon.

The Yorkshire side went into the match having won their last two league games, yet were forced to make do without usual starter Jack Harrison, the on-loan Englishman ineligible to feature against his parent club.

Although the league leaders unsurprisingly dominated possession in the opening exchanges, it was the visitors who looked the more threatening, getting in at will down the host’s left-hand side through the in-form Raphinha.

Despite looking dangerous on the break, the visitors struggled to really find that piece of quality in the final third, while City wasted a handful of key opportunities, Raheem Sterling squandering a promising chance on his return to the starting lineup.

The breakthrough eventually came on 42 minutes, Helder Costa finding Patrick Bamford just inside the box, the striker teeing up Stuart Dallas whose effort found the back of the net after initially striking the post.

Just moments later, however, and the away side’s fortunes took a different turn, captain Liam Cooper shown a red card after a forceful challenge on Gabriel Jesus just before half-time, the Scotland international given his marching orders following a VAR review.

After an end-to-end first-half, the second period was, as expected, largely dominated by the hosts, with their man advantage making the difference as they probed relentlessly for an equaliser, while the away side were left largely camped on the edge of their own box.

That being said, Illan Meslier in the Leeds goal hadn’t been overly troubled despite that intense spell of pressure, before City’s dominance finally paid off with 15 minutes remaining, after good work from Bernardo Silva found Ferran Torres, the Spain international calmly slotting home from close range.

To their credit, the 10-men of Leeds continued to commit bodies forward after conceding, with that bravery ultimately paying off as the visitors snatched a winner in stoppage time, Dallas once again the man on the scoresheet with a composed finish through the legs of Ederson after a brilliant breakaway.

Only 4 managers have beaten Man City in the Premier League this season:

That result has moved Bielsa’s side into the top half of the table, the Argentine praising the ‘spirit’ of his ‘rebellious team’ for pulling off a shock result despite slipping to ten men.

“The value of the victory increases because it was achieved in a game where we were dominated and demanded character, effort and personality,” Bielsa told BT Sport.

“I think we have to link the victory to the spirit of the players. The spirit of all the players added together creates a uniform effort. It’s very difficult to win games like today. I think we deserved it but the fair thing would have been for City to win it because they had the dominance and the chances.

“From the adversity and effort of the players it was emotional for me. It was a rebellious team. They weren’t resigned to lose what we at play.

“I value a lot the English refereeing and with the added factor of VAR all the decisions are justified.

“New targets? No. The target is always to impose yourself in the next game and in accordance to the results we take, it will leave us in a position we deserve to be.”

Leeds are next in action against Liverpool in the Premier League on 19 April.

Who you having? – European Football’s top performing young centre-backs