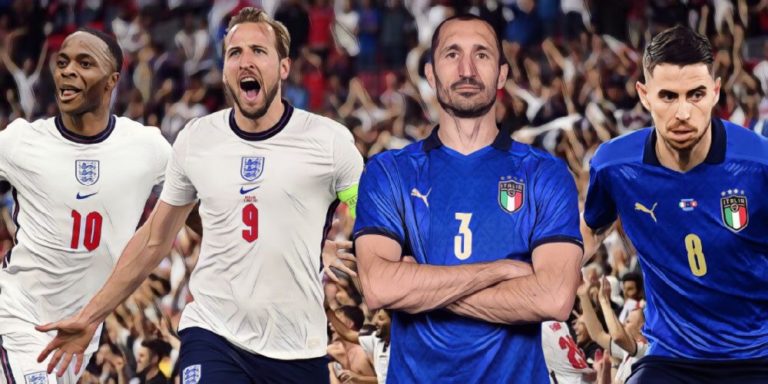 England take on Italy in Sunday’s Euro 2020 final at Wembley, the Three Lions yet to better their showpiece opponents at a major tournament.

Gareth Southgate’s men clinched their place in a maiden European Championship final with a win over Denmark in the last four, goals from Raheem Sterling and Harry Kane securing a comeback victory after they had fallen behind to an early Mikkel Damsgaard free-kick.

24 hours earlier, Roberto Mancini’s side edged an enthralling encounter with Spain on penalties, Alvaro Morata missing the decisive spot-kick after having previously drawn his side level in normal time, following Federico Chiesa’s opener.

While it’s been a stellar tournament for Jordan Pickford – aside from a few shaky moments against Denmark – Italy stopper Gianluigi Donnarumma has no doubt been just as consistent and has looked a man mountain in between the sticks.

Still only 22, the current free agent – who looks set to join Paris Saint-Germain this summer – has already racked up over 250 club appearances for AC Milan, having made his debut at the tender age of just 16.

For his country, he is now the undisputed number one and appears ready to keep that starting berth for the next ten to 15 years, while at Euro 2020 he has once again caught the eye, notably denying Alvaro Morata in the semi-final shootout win and keeping a clean sheet in all three group games.

There’s no doubt been some typical moments of madness from Kyle Walker at Euro 2020, not least his erratic passing in the opening game against Croatia, yet he’s developed into a real asset under Gareth Southgate after fending off his competitors in a highly contested position.

Either at full-back or on the right of a back three, the Manchester City man has been a defensive rock, showcasing electric recovery speed that is just remarkable for a player who is the current England squad’s most senior man.

The 31-year-old may not provide the same creative threat as his fellow full-back Luke Shaw, yet it would seem a deliberate ploy for the speedster to just hang back a little, as to cover a centre-back partnership that isn’t exactly blessed with pace.

Against Denmark, in particular, he bailed out his fellow defenders on more than one occasion, preventing a handful of potentially dangerous counter-attacks with a speed that even the nippy Mikkel Damsgaard couldn’t match.

Speed may not exactly be the watchword for this centre-back pairing, but as both Leonardo Bonucci and Giorgio Chiellini have proved this summer, the brain can be just as important as the body.

The slightly younger of the two at ‘just’ 34, Bonucci has been an absolute rock for Roberto Mancini’s side throughout the tournament, putting himself on the line when it matters but also offering a real threat with the ball at his feet.

Under pressure against a youthful Spanish attack in the semi-final, the Juventus defender never seemed to panic, putting all 108 of his senior caps to good use to help drag Italy to the final, firing in an excellent penalty in the shootout en route to victory.

“Even after a thousand battles, they still smell blood. Winning mentality, experience, character, strength. At managing moments they are two absolutely top players”

Bonucci’s club teammate and fellow veteran, Giorgio Chiellini is a leader in every sense of the word, from his passionate belting out of the national anthem before kick-off, to his sheer determination to thwart any and every foray into the Italian penalty area.

In a summer which has seen a number of young stars enjoy breakthrough tournaments – i.e Spain’s Pedri and England’s Bukayo Saka – it’s been just as enjoyable to witness a player at the other end of the scale still performing, the 36-year-old one of the game’s last proper, old-school defenders.

A word must also be said for Harry Maguire, who’s recovered from injury to put in a string of fine displays for the Three Lions, notably bullying the German attack in the last-16 win, while also netting another major tournament quarter-final goal in the win over Ukraine, having headed in a similar effort in 2018 against Russia.

He’s no doubt had a brilliant tournament, but there have been games where Maguire hasn’t quite been tested in a defensive sense, with both Chiellini and Bonucci edging it not only for their summer displays but also for the lengthy careers they’ve enjoyed at the top level.

Arguably one of England’s best players of the tournament, Luke Shaw has capped a fine club campaign with a succession of decisive displays for his country, proving one of Gareth Southgate’s most creative forces from left-back.

The 25-year-old must have been fearing for his potential tournament involvement after seeing Kieran Trippier handed a starting berth at left-back in the opening game win over Croatia, yet was included from the start against Scotland and has been an everpresent since.

With a hand in both goals against Germany, Shaw followed that up with two assists against Ukraine in the quarter-final’s, his open play and set-piece delivery seemingly having drastically improved in recent seasons, as have the timing of his forward bursts.

Jorginho has defied his early critics at Stamford Bridge to become a key player for both club and country, helping Chelsea to Champions League success under Thomas Tuchel, before playing a pivotal role in Italy’s surge to the Euro’s final.

Seen as almost the epitome of everything wrong with Maurizio Sarri’s uninspiring play style in his debut season in west London, the 29-year-old has grown into an integral player for his club, forging a superb partnership with N’Golo Kante in the centre of the park.

For his country, the former Napoli man is the midfield metronome, dictating the tempo and the play in his role as the deepest of a stellar Italian midfield trio. There’s no doubting that England will fear allowing the playmaker – and his midfield partners – too much time to dictate on Sunday, with that midfield battle likely to be crucial to who comes out on top.

Alongside Jorginho in both the Italian midfield and in our selection is Marco Verratti, the Paris Saint-Germain midfielder a simply sublime technician and one of the best in his position in the world.

Having been injured for the opening two games of Euro 2020, his return to the starting XI was no foregone conclusion due to the superb form of Sassuolo star Manuel Locatelli, yet Mancini made the bold and arguably correct call to reinstate the more experienced Verratti – and that faith has been rewarded.

The 29-year-old won’t grab the headlines and is no box-to-box goalscoring midfielder, yet he’s vitally important to this Italian side and offers the ability to not only retain possession in the crucial moments, but also the knack of making that killer pass in the final third, as he did to tee up Nicolo Barella in the quarter-final win over Belgium.

The third midfield selection is arguably the toughest, with the aforementioned Barella having impressed, as to have both Kalvin Phillips and Declan Rice in the English midfield.

However, despite a fairly quiet tournament, we’ve opted for Mason Mount, the Chelsea man becoming an increasingly important figure for his country and someone who Gareth Southgate appears to have complete faith in.

Amid the clamour for both Jack Grealish and Phil Foden, Mount has kept his place in the starting XI in four of the six games thus far, having only been absent from the game against Czech Republic after being forced to self-isolate, with that predicament also seeing him start from the bench against Germany.

The star of the Champions League final for his club, the 22-year-old not only offers versatility and quality to England’s midfield, but also a real willingness to press and win the ball back, something that will be invaluable against an experienced Italian outfit.

A consistent starter for Chelsea’s Champions League winning side and England’s #EURO2020 finalists.

Raheem Sterling has catapulted himself into a national hero following a simply stunning summer performance, acting as England’s chief attacking threat throughout the tournament.

The Manchester City man has been met with unfair criticism throughout his career and was an initially unpopular inclusion in the group stages, with even his goals seemingly not enough to appease many of the doubters.

As the tournament’s progressed, however, he’s made a whole lot of people look rather silly after a succession of pivotal displays, including an outstanding showing against Denmark last time out.

He should have added to his tally of three Euro 2020 goals, yet it was he who applied the pressure for Simon Kjaer’s own goal, while he also won the matchwinning penalty with a brilliant drive into the box, capping what had been a stellar performance from the very outset.

On the other flank, Italy’s Lorenzo Insigne gets the nod, fending off teammate Federico Chiesa who has been a bright spark in recent games.

Off the back of a career-best campaign for Napoli that saw him bag 19 Serie A goals, the 30-year-old has continued that form for his country, netting two superb strikes in the tournament thus far, the second of which proved to be the matchwinner against Belgium.

Not only is he a threat cutting in off the left, but the diminutive winger also has the speed and the trickery to be able to beat his man and will likely hand Kyle Walker the toughest test of his tournament.

Lorenzo Insigne, Marco Verratti & Ciro Immobile together at Pescara 9 years ago in Serie B

The trio helped their club secure promotion to Serie A

Harry Kane has shaken off a quiet start to catch fire at just the right time for Gareth Southgate’s side, overcoming his group stage drought to net four times in the knockout phase.

That tally, which includes his winner against Denmark, has moved him to just one goal behind Patrik Schick and Cristiano Ronaldo in the race for the Golden Boot, while he’s also drawn himself level alongside Gary Lineker as the highest-scoring Englishman in major tournament history, the two men currently level on ten goals apiece.

Those individual accolades will no doubt be secondary for a player who is seemingly desperate to secure a first major honour of his career and be the man to hold the trophy aloft should the Three Lions claim victory on home soil at the weekend.

For the ‘hosts’ to win, they will need their skipper to replicate his semi-final performance, the Tottenham striker leading the line superbly and relieving pressure at the right moments by coaxing the Danish defence into committing needless fouls.

Against an Italy side who are seemingly the masters of the ‘dark arts’, Kane – and England – will have to be equally as cunning.

Read Also – Opinion: Jack Grealish is world class, but Man City may not be the ideal home for him