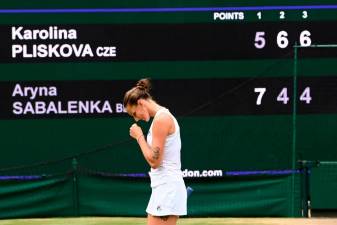 LONDON: Ashleigh Barty will fulfil a childhood dream when she plays in Saturday’s Wimbledon final but Karolina Pliskova stands in her way of achieving a more significant one.

Pliskova is driven more by proving to her “brutal critics” she was right in sticking to her style of play rather than alter it radically as the former world number one dropped out of the top 10.

Whatever happens on Saturday a return to the top 10 beckons for the 29-year-old world number 13 but for the keen angler the catch of the day would be her first Grand Slam title.

To do so she must overcome a world number one who produced her best performance yet of the fortnight in beating 2018 champion Angelique Kerber in the semi-finals.

Barty also has a firm hold on their head-to-head meetings leading Pliskova 4-2 (1-0 to Barty on grass) including their most recent meeting in Stuttgart on clay this year.

The aura of Cawley has been ever-present at the All England club with Barty wearing a specially-designed dress in tribute to the iconic scallop one that she wore in 1971.

Indeed one cannot escape it as Barty is the first Australian women’s finalist since Cawley won her second title in 1980.

“I couldn’t be more proud to be in a position to wear an outfit inspired by her.

“Now to kind of give myself a chance to create some history almost in a way that’s a tribute to her is really exciting.

“I couldn’t be more rapt to have that opportunity on Saturday.”

The 25-year-old 2019 French Open champion put her childhood dream of playing in a senior Wimbledon final — she won the junior title in 2011 — into some perspective.

“I wasn’t sure if it would ever happen honestly,“ she said.

“I think Wimbledon for me has been an amazing place of learning.

“To come away with losses in those two tournaments, I learned a hell of a lot.

“I think a lot of the time your greatest growth comes from your darkest times. I think that’s why this tournament has been so important to me.”

Barty’s movement around the court has been a feature of her campaign which she admits seemed a remote possibility when she retired from her second round match at the French Open with a left hip injury.

“It was trying to make sure she was fresh enough and her body was good enough to be able to play each match,“ said her coach Craig Tyzzer.

“It’s got better and better each time she played. She’s sort of hitting the tournament at the right time.”

Pliskova’s three-set semi-final win over Aryna Sabalenka featured few rallies of any great length — the first set there were only two that went over nine exchanges.

The Czech, though, showed her resilience in becoming only the third player in the last 34 Wimbledon women’s semis to reach the final having lost the first set.

For Pliskova, unlike Barty, the pressure may weigh less heavily as her goal was to make the second week and anything after that was a bonus.

The ultimate bonus would be to win her first Grand Slam singles title — she lost in her only previous appearance in the final of a major the 2016 US Open final — and become the first Czech winner since Petra Kvitova won her second title in 2014.

Her coach Sascha Bajin believes that in the past Pliskova wanted a title so much it has affected her mentally.

“The problem becomes if you want something so much, it’s just as bad as not wanting it enough,“ he said.

“It kind of paralyses you and it looks like you don’t care, when it’s the complete opposite.”

Despite being behind on head-to-head meetings, the fact that it is a first Wimbledon final for both women could be a leveller.

“I mean, we had some good matches,“ said Pliskova.

“Of course, I lost more. But I think she has an extremely difficult game to play.

“It’s going to be difficult on grass because of her slice and just her game overall.

“She has a Grand Slam, but also for her is the first Wimbledon final. I think we both have good chances.” — AFP