Southgate fears changes to Euro 2020 format due to COVID-19

Southgate fears changes to Euro 2020 format due to COVID-19 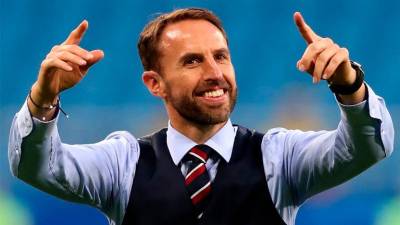 LONDON: England manager Gareth Southgate said the format of next year’s European Championship might have to be modified for it to take place successfully amid the COVID-19 pandemic.

Euro 2020, initially scheduled from June 12 to July 12 this year in 12 cities across the continent, was pushed back to 2021 due to the coronavirus pandemic that shut down football in March.

As infections rise, questions linger over the feasibility of staging the showpiece event across several locations.

“You hope, the indications are that towards spring things might look a bit brighter, and I think generally those predictions have been fairly accurate.”

London’s Wembley stadium is set to host six matches, including the semifinals and finals, and Southgate said England would have no problem stepping in if it was decided to cut the number of host nations.

“We would definitely be capable of hosting, we are due to host a lot of games at Wembley anyway, so I don’t think that will change, but it really is an unknown what the format might end up looking like,” he added.

Jack Grealish has welcomed comparisons to former England midfielder Paul Gascoigne after impressing on his first international start on Thursday.

Grealish, 25, was named man of the match in the 3-0 victory over Wales at Wembley, with his style of play drawing comparisons to Gascoigne, who won 57 England caps and starred at the 1990 World Cup.

“I don’t really see myself as him but I’d love to be like him, the way that he played football,” Aston Villa midfielder Grealish told British media.

“I would love to get compared to Gazza. I think he is an absolute icon. He, along with Wayne Rooney, was probably one of the greatest England players over the last 30 years.

“There have been a load but if they were the top two, Gazza would be my first.”

With Euro 2020 on the horizon, Grealish is hoping to cement his spot in Gareth Southgate’s England side.

“I want to be in the squad now for the next, however long – five, six years – and I want to have a long England career and get many caps,” he said.

England face Belgium in the Nations League on Sunday followed by Denmark on Wednesday. – Reuters