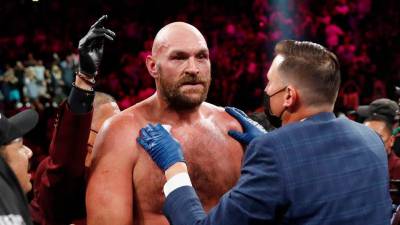 LAS VEGAS: Tyson Fury won a slugfest with Deontay Wilder with an 11th round knockout to retain his WBC heavyweight title at T-Mobile Arena in Las Vegas on Saturday.

Fury knocked Wilder down in the third round but the self-proclaimed “Gypsy King” responded in the fourth, sending the Briton to the canvas twice thanks to his powerful right hand.

With the win, Fury (31-0-1) has now taken two of the three meetings between the rivals.

“I have proved time and again that I can never be written off,” Fury told BT Sport after the fight.

“I didn’t have my best performance but I pulled it out of the bag when it needed to be done.

“He did keep getting up but it was that final right hand to the side of the head that finished him.

“I wasn’t hurt. You get hit, you wake up on the floor. I got up and was very conscious the whole time. I was one punch away from knocking him out in the whole fight.

“I went over and said well done and he said he didn’t want to show any sportsmanship or respect. Very surprised by that. He’s an idiot.

“I pray for him. I am thankful that we all get out of the right in one piece and get to go to our families.” – Reuters