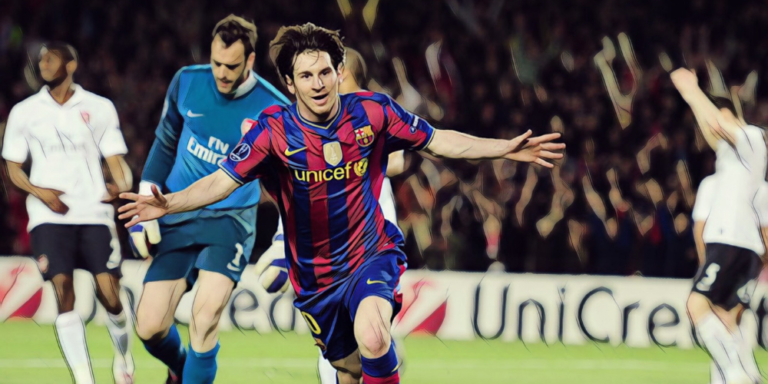 “He made the impossible possible.”

Those are the words of Arsene Wenger, who found himself awestruck at the ability of Lionel Messi following a Champions League meeting between Barcelona and Arsenal in April 2010.

Lionel Messi has made the impossible seem possible on a routine basis during a career that has scaled unprecedented heights, but rewind over a decade and his singlehanded destruction of the Gunners was amongst the devastating displays that left its audience consciously aware they were witness to something special.

The draw for the quarter-finals of the Champions League had pitted the holders against Arsenal, with the two teams sharing four goals in an entertaining first leg encounter.

Messi – who had scored 38 goals the previous season after assuming the role as Barcelona’s leading light – had struggled to impact that clash at the Emirates, as Zlatan Ibrahimovic scored both Barca goals before the home side staged a second-half fightback.

The return, however, belonged to one man.

Nicklas Bendtner had Arsenal fans daring to dream with the opening goal to put the Gunners ahead at the Camp Nou, but any hopes of progress were soon dashed following a mesmeric Messi performance.

Messi had previously scored just one goal against Premier League opposition, an uncharacteristic towering header in the previous season’s final against Manchester United.

Even for all his talent and status as holder of the Ballon d’Or, there remained the arrogant Premier League perspective that the Argentine could not truly be hailed until proven against English opposition.

What followed was a performance that instead shone a spotlight on a unique talent and the world’s finest footballer.

Arsenal’s lead lasted just two minutes as Messi opened his account for the evening, receiving Pedro’s pass in a central area, before earning a stroke of good fortune as his through ball ricocheted off Mikael Silvestre back into his path.

Whilst there was an element of luck at how the chance presented itself, there was nothing fortuitous about the finish as the Argentine lashed home a venomous drive from the edge of the area to bring Barcelona level.

Barcelona were dominant and continued to pour forward in search of a second, with Arsenal’s backline backtracking whenever the ball found the feet of the Catalan’s captivating number ten.

Messi’s second arrived eight minutes before the break, Eric Abidal’s overlapping run and low cross was scrambled only half clear, as Pedro retrieved the loose ball and laid a pass into the path of the onrushing Messi.

Coming across goal and on his weaker right side, the Argentine made no mistake after lifting a finish above Almunia whose desperate sprawl at the forward’s feet proved in vain.

The closing stages of the half appeared to be an assignment of damage limitation for the Gunners, but their backline found itself exposed once more before the break.

Barcelona’s passages of play had scythed through the north Londoners throughout the opening 45 minutes and the visitor’s high line was ruthlessly exposed just three minutes before the half-time whistle.

Thomas Vermaelen failed to win an aerial duel with Messi, with the loose ball breaking to Seydou Keita whose header forward sent the Argentine racing clear into the Arsenal half.

Messi began inside the centre circle before beating the offside trap, racing away in that familiar scampering fashion with the Gunners’ defence trailing in his wake.

Almunia attempted to close down the angle as Messi approached the edge of the area, remaining upright as he sought to use his frame to shutdown the forward’s options.

Unfazed, however, Messi produced a piece of exquisite audacity to seal his hat-trick and send the Camp Nou into uncontrollable raptures.

With one delicate lift of his left boot, he guided a sumptuous lofted finish up and over the stranded Spaniard, who could only watch in astonishment as the Catalan crowd rose again to applaud more Messi magic.

Making the long walk back into the dressing rooms at half-time, one can only imagine the thoughts amongst the Arsenal players after being on the receiving end of Messi’s extraterrestrial brilliance.

This was a footballer operating on another level to any other, both in terms of those present on the pitch and elsewhere across the planet.

Messi was the artist and this was his work of art, using a wondrous left foot to paint his picture in an expressive demonstration of his unique and unrivalled gift.

Arsenal, to their credit, regrouped after the break and staged some sort of second-half pressure, both Tomas Rosicky and Bendtner wasting the limited opportunities that came their way.

The damage had been done during one irrepressible opening salvo from the man of the moment Messi, though there was still time for Barcelona’s glorious genius to crown an iconic individual performance.

Two minutes from time, Xavi’s nonchalant flicked pass through oncoming traffic found Messi in alarming space, with the forward setting off towards goal as trepidation filled the travelling Gunners support.

Starting centrally before drifting left, he breezed beyond Emmanuel Eboue’s outstretched leg, before holding off the challenge of Thomas Vermaelen and firing low – hit initial strike cannoning off Almunia’s legs.

The loose ball rebounding back into his path, Messi made no mistake with his second strike, drilling a low effort through the legs of the goalkeeper as the Catalan crowd erupted once more.

Arsenal had been comprehensibly beaten, the north London side on the wrong end of a performance which remains one of the greatest Messi has produced in a career littered with unforgettable moments.

Wenger knew he had witnessed greatness in its finest form, likening Messi to a ‘PlayStation’ footballer and fantasising at the heights the South American sensation could reach.

“I think he can take advantage of every mistake you make. Barcelona are a very good side but of course they have Messi who can make the difference at any moment in the game.

“He is very young but he can achieve a lot. There are not many players who can score four goals like he did.

“He has six or seven great years ahead of him and he can become unbelievable. Touch wood nothing happens to him.”

Fortunately for Wenger and the watching world those hopes came true, as Messi reached unprecedented standards at the summit of the game, collecting a record number of Ballon d’Or awards and breaking countless records in the process.

He remains, even into the latter stages of his career, one of the finest footballers in world football, and when he is gone those who watched him will recount tales of a footballing genius.

His devastating four-goal display against Arsenal was a night few will forget.

The post Iconic Performances: Messi’s four goal demolition of Arsenal at the Camp Nou first appeared on The Football Faithful.