More than half of the 23 early closing entries for the Unibet Champion Hurdle at the 2022 Cheltenham Festival come from Ireland. The one they all have to beat whether trained in Britain or the Emerald Isle, though, is Honeysuckle. She has been at the head of the Champion Hurdle betting ever since winning last year’s renewal of the opening day feature.

According to the Betfred ante post market, which is now Non Runner No Bet, the main dangers to Henry De Bromhead’s wonder-mare Honeysuckle (8/13) are two of the four entries from the Willie Mullins stable. Appreciate It (5/1) was the runaway winner of the Supreme Novices Hurdle over the Champion Hurdle course and distance at the Festival last season. A slight setback has delayed his chasing career, so Mullins keeps him over the smaller obstacles.

Next in the Champion Hurdle betting is a horse that Honeysuckle knows a lot about already. Sharjah (7/1) has had plenty of cracks at the mare but this other Mullins mount has failed to beat her in four previous encounters. He has won the Morgiana Hurdle and Matheson Hurdle again this term, however. Amongst a sea of Irish horses that dominate the market, the leading British hope is one of the other past Champion Hurdle winners in Epatante (8/1).

Nicky Henderson and JP McManus’ mare landed this two years ago but has since been eclipsed by Honeysuckle. Kept apart from the favourite in the UK, Epatante has dead-heated in the Fighting Fifth at Newcastle and then outright defeated Not So Sleepy when regaining Kempton’s Christmas Hurdle on Boxing Day. Other British-based runners entered in the Champion Hurdle are 20/1 and bigger on horse racing betting sites like Betfred.

A number of five-year-olds, many of which contested the Triumph Hurdle and other top National Hunt juvenile races last season, come next. Zanahiyr (10/1) may be the pick of the Gordon Elliott quartet given Champion Hurdle entries here. Although only fourth in the Triumph, he has three subsequent seconds in Grade 1 company to his name.

Cullentra House stable companions Teahupoo (12/1) and Saint Felicien (20/1) both represent owners Robcour, meanwhile. The latter remains unexposed after just two career starts at the time of writing. Adagio (20/1) ran two cracking races in defeat in the Triumph and then on handicap debut in the Greatwood Hurdle over the Champion Hurdle course and distance for David Pipe.

Quilixios (25/1) will be the De Bromhead stable’s second string, meanwhile. He hasn’t won since landing the Triumph on the New Course here for owners Cheveley Park Stud. Tritonic, fifth in both that race and the Greatwood, is a 50/1 outsider for trainer Alan King. The last of the five-year-olds among the entries and Champion Hurdle betting is Monmiral (33/1), a horse Paul Nicholls has thus far kept away from Cheltenham.

Many in market with points to prove

Irish raiders Saint Roi (25/1) and Abacadabras (33/1) have both flattered to deceive since big wins in the 2020 County Hurdle and 2021 Aintree Hurdle respectively. Song For Someone (33/1), meanwhile, missed the Cheltenham Festival last season but has a win and a second in the International Hurdle on the New Course for trainer Tom Symonds.

Most online bookmakers don’t know what to make of major improvement Tommy’s Oscar (33/1), who has progressed out of handicaps. Trained by Ann Hamilton for owner-husband Ian, the assessor now rates this horse 156. Connections are looking at the official Champion Hurdle Trial at Haydock, now run as the New One Unibet Hurdle, later on in January to see if he is graded calibre.

It is 40/1 and bigger bar those in the Champion Hurdle betting with Betfred. Among these rank outsiders is last season’s fourth, Aspire Tower, who can only third on paper at best for De Bromhead following a lengthy racecourse absence. The aforementioned Not So Sleepy, who dead-heated at the highest level in the Fighting Fifth, may just have been a flash in the pan in atrocious conditions for Hughie Morrison.

Another of the past Champion Hurdle winners in dual race hero Buveur D’Air has an entry despite his advancing years at the age of 11. Epatante is clearly the main hope for Henderson and McManus, however. Christmas Hurdle second Glory And Fortune, the enigmatic Goshen, and Irish trio My Mate Mozzie, Echoes In Rain and Cask Mate complete the potential field. Many runners hold other entries at the Cheltenham Festival. 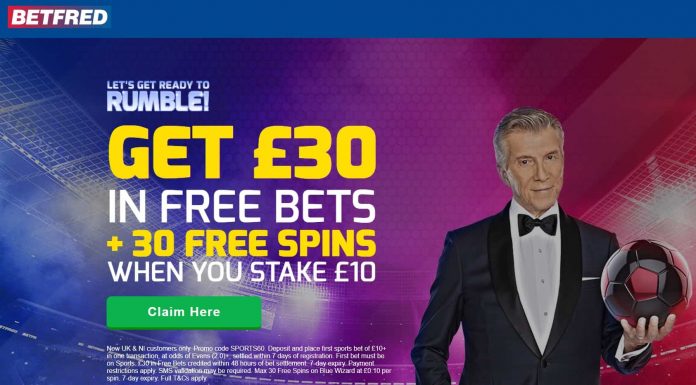 As well as offering Non Runner No Bet (NRNB) on their ante post Champion Hurdle betting market, Betfred offer a bet £10 get in £30 free bets and 30 free spins for all new customers. Sign up using promo code SPORTS60 and deposit at least £10 via debit card.

Place a £10 bet or more on any sportsbook market with minimum odds of Evens (2.00). The qualifying bet must be settled within seven days to get those Betfred free bets and free spins. Additional and separate T&Cs apply. Just follow these steps below to get this great welcome bonus: