Although facing a goalkeeper from 12 yards with no one else in your way might not seem too daunting a task to most, Manchester City fans will lead you to believe that it is one of the more difficult aspects of the game. Recently, İlkay Gündoğan (who was – and still is – in the form of his life) joined an elite club of Cityzens who have a penalty success rate of less than 70% in the Premier League, including Kevin De Bruyne, Raheem Sterling, Gabriel Jesus and Riyad Mahrez.

Welcome to the club bro https://t.co/h0qs8pp7fF

On the other hand, the likes of Jorginho and Bruno Fernandes (who are dubbed ‘penalty merchants’ by the same fans that watch their team attempt to send spot-kicks into lower Earth orbit) have scored 44% of their combined club goals from the penalty spot (with the former scoring a greater percentage by far with 68.75%).

Usually (when you hit the target), penalties are a battle of wits more than that of shooting vs reflexes. Keepers and takers alike do their research on each other pre-match, attempting to get inside their opponent’s mind and predict which side he is going to dive or shoot. This is because a goalkeeper simply does not have enough time to react and stop a penalty after it has been hit, so guessing is their best bet.

The two aforementioned players, however, have one unique trait which sets them apart from the hoard of penalty-specialists and makes them the very best – their technique. Both Jorginho and Fernandes take a jump in the final stage of their run-up, looking to let the keeper make the first move and shooting accordingly.

This technique is, of course, easier said than done, so let us take a look at both of these players’ penalty-history since they adopted this technique and try to break it down.

We will do so in a two-piece series. In this piece, our focus will be on Jorginho.

Jorginho first started taking penalties at Hellas Verona in 2013, but at the time, he was just like any other taker. It was not until a couple of years into his Napoli days – the start of the 2017/18 season to be precise – that he gave the world the first glimpse of the jump technique.

It must be noted that the concept of trying to watch the keeper’s move and place the penalty accordingly was, of course, not Jorginho’s. Players had been stuttering and feinting in their penalties for many decades even before Jorginho’s career. This was most prevalent in the early 2010s when the likes of Paul Pogba, Neymar and Simeone Zaza among others had comically slow run-ups complete with stutters or feints that usually made the keeper run out of patience.

However, a 2010 amendment Law 14 of the IFAB Laws of the Game states the following:

Yet, stuttering was still legal. That was until 2016, when another amendment to Rule 14 made stopping after the run-up had started illegal, definitively killing off stuttering as well.

As is the case with most amendments to laws of any sort, they only pave the way for ‘offenders’ to find a loophole and exploit it. Jorginho was the first man to do that in this instance, so he can take the credit for inventing the jump technique.

The very first jump penalty the world got to witness on the professional stage came in the UEFA Champions League qualifiers in 2017 when Jorginho did this against Nice’s Yoan Cardinale.

He started his run-up at the edge of the penalty area to take a seemingly-normal penalty, but after a few quick short steps, suddenly sprung up with both feet in the air like this:

By jumping up, Jorginho could slow down his movement while not stopping, stuttering or feinting. While in the air, he had time to take a look at the keeper and see what he was doing.

His feet are the giveaway here; to spring to either side for a dive, the keeper needs to generate some thrust off the ground, and he does so by shifting his weight to the leg on the side that he is going to dive in, while the other is bent at an acute angle to push against the ground and thrust him into a dive.

This was, as aforementioned, the very first time anyone got see something like this, which is why the keeper has shown his hand even before Jorginho has reached the climax of his jump, but the Goalkeepers’ Union would soon catch up.

For now, though, penalties were child’s play for Jorginho.

The first instance in a league match where a jump penalty was deployed came in the match between Napoli and Lazio, where Thomas Strakosha was the next victim.

This camera angle does a great job of showing what Jorginho does mid-air. Clearly, his head is up here and he is looking at the goalkeeper, trying to work out which way he is going to dive.

Strakosha certainly did a better job then Cardinale by not effectively starting his dive when Jorginho didn’t even have one foot on the ground, but he too could not conceal his hand, because his centre of gravity (line of gravity for the science nerds) is tilted to his right, clearly indicating that he is set to go in that direction. Therefore, Jorginho slots it to his left.

Here is more of the same against Ederson, who has completely sold himself by the time Jorginho lands his jump with his feet and centre of gravity pointing to his left, so the Italian international went the other way. 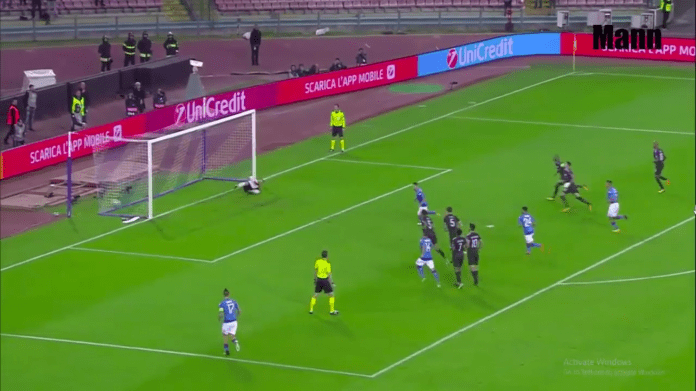 Scuffet did much better than those before him as his centre of gravity was fine when Jorginho prepared to take his kick, but he gave away his plan with his feet. The Napoli man should have ideally placed his spot-kick to his left, but puzzlingly, he went in the same direction as the keeper.

After ditching the blue of Napoli for a slightly-darker tinge of the same colour in the summer of 2018, Jorginho didn’t take too long before establishing himself as Chelsea’s go-to man from 12 yards.

He was wearing a yellow kit when he stepped up to face Ben Hamer, who didn’t put up a serious fight as his centre of gravity clearly pointed to Jorginho’s left, so the Italian international went right. 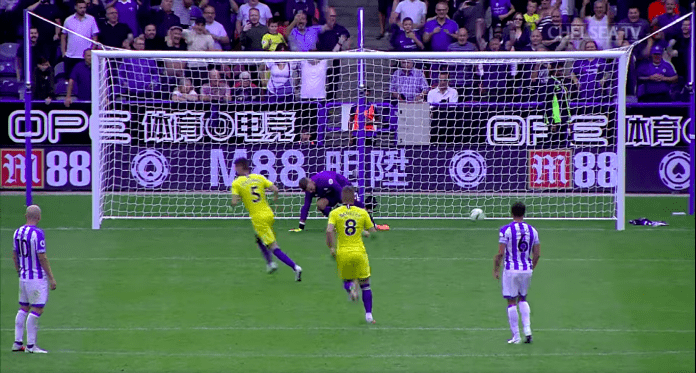 The keeper couldn’t move a muscle.

Onana got the double treatment.

The first goalkeeper to really give Jorginho a tough time was Bernd Leno.

The German international gave absolutely nothing away when Jorginho lifted his head up just before shooting, as his feet and centre of gravity were perfectly coy.

Jorginho remained calm, though, and focused on directing his shot to the bottom corner. Leno reacted accordingly, but the placement was too perfect.

Alisson took a similar approach to Leno, but he was more successful.

Like Leno, the Brazilian keeper did not move a muscle as Jorginho prepared to shoot, letting the Italian international make the first move.

Jorginho went to the keeper’s left again, but this time, his shot was not well-placed, so Alisson made a simple stop by reacting quickly.

Guaita was the next one to get a double treatment, and in all honesty, he made it a bit too easy, helping Jorginho regain his confidence.

On paper, everything seems alright, but Jorginho ended up missing this penalty because his shot came back out off the inside of the post. In all fairness, given the fact that the keeper was going the wrong way in the first place, there was no need for him to attempt to place his shot with such precision.

Jorginho did score a penalty against Krasnodar, though, as he netted in the reverse fixture a month and a half later, with the keeper rooted to his spot.

We were treated to round two of Leno vs Jorginho in 2020, and this time, things played out slightly differently.

Once again, Leno gave nothing away with his position as Jorginho stepped up to take his kick.

The result was identical to what happened against Alisson, as a poorly-placed shot was easily kept out by a reaction save.

This was Jorginho’s last penalty under Frank Lampard, but his responsibilities were restored when Thomas Tuchel arrived.

Jorginho’s first penalty under Tuchel was in quite a tense situation – an important London derby which was only the German manager’s third match in charge.

This time, there was no jumping or messing about. Jorginho’s head was down as he struck the ball – he didn’t care about Lloris’ movement. The Chelsea man put his foot through the ball and found the back of the net even though the keeper guessed right.

Therefore, Jorginho converted his first non-jump penalty after coming up with the technique.

Jorginho returned to his jumping ways against Sheffield United with simple success. Such variation (which has been used a lot more prevalently by Fernandes) should help Jorginho keep the goalkeepers guessing, which should improve his conversion rate.

With a success rate of 84.21% on jump penalties and 85% on any penalties after first deploying the jump, it’s safe to say that Jorginho has been pretty successful from the spot. 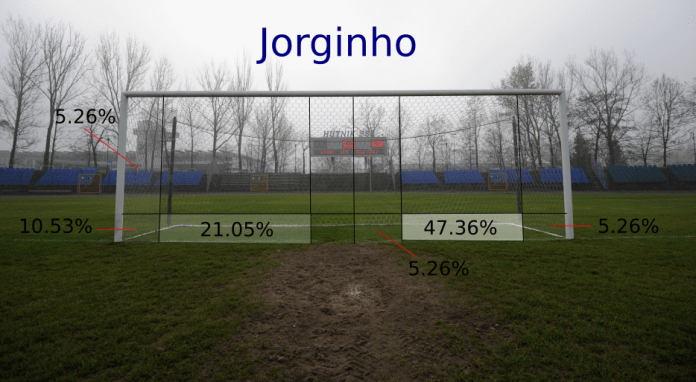 This visualisation of Jorginho’s placement of jump penalties provides us with some interesting conclusions. Nearly 95% of his penalties are low, while over half go to the goalkeeper’s left. 47.36% of the Italian international’s penalties are low and to the right, but this is also the zone where all three of his saved penalties were supposed to go.

That is all for Jorginho’s penalties, which undoubtedly are very unique and pose a completely different challenge to goalkeepers. There was a stage last season when his secrets were nearly spilt, which is why it was wise of Lampard to take him off penalties. Now that he has been reinstated to the role of penalty-taker under Tuchel, his variations should help him be even more successful.

Stay tuned for the next piece in this series focusing on Bruno Fernandes, which will be out tomorrow.