Manchester City boss Pep Guardiola hailed his side’s ability to get the job done without a recognised striker after victory over Leicester City at King Power Stadium.

City secured their third successive top-flight victory to move up to second in the Premier League table. Bernardo Silva bagged the all-important goal on 62 minutes after Joao Cancelo’s shot was deflected by Caglar Soyuncu into his path. It was the only goal of an entertaining game in the East Midlands between two top-class teams.

Guardiola acknowledged the strength of the opposition. And he revealed the tactics behind City’s third straight win.

“It is a difficult place to come and we know that. Leicester make that step forward to be in the top of the league. We did very many good things,” he told BBC Sport.

“We did really well, the process we found and we let them run a lot. We know how dangerous Jamie Vardy and also Harvey Barnes are in transition. The players were able to be focused and to concentrate.”

A very tricky fixture boxed off!

Leicester played a full part in proceedings and created several chances. Barnes clipped the top of the bar with a header before Vardy had a goal ruled out for offside.

The triumph means that only Manchester United are above the champions in the standings.

The Citizens played many games last season without an out-and-out striker in the starting line-up. Sergio Aguero returned towards the end of the campaign and enjoyed a fairy-tale ending to his City career.

But the Etihad side seem happy to play a certain style without a number nine in the ranks. It worked again on Saturday as the Foxes were vanquished.

And Guardiola was full of praise for the way his charges kept on pushing for a goal despite facing a world-class goalkeeper in form.

“Kasper Schmeichel is a really top keeper so it sometimes happens. The good thing is the amount of chances we create,” he added. “This is a good thing. Of course, we would have loved to score more goals. We deserve it.” 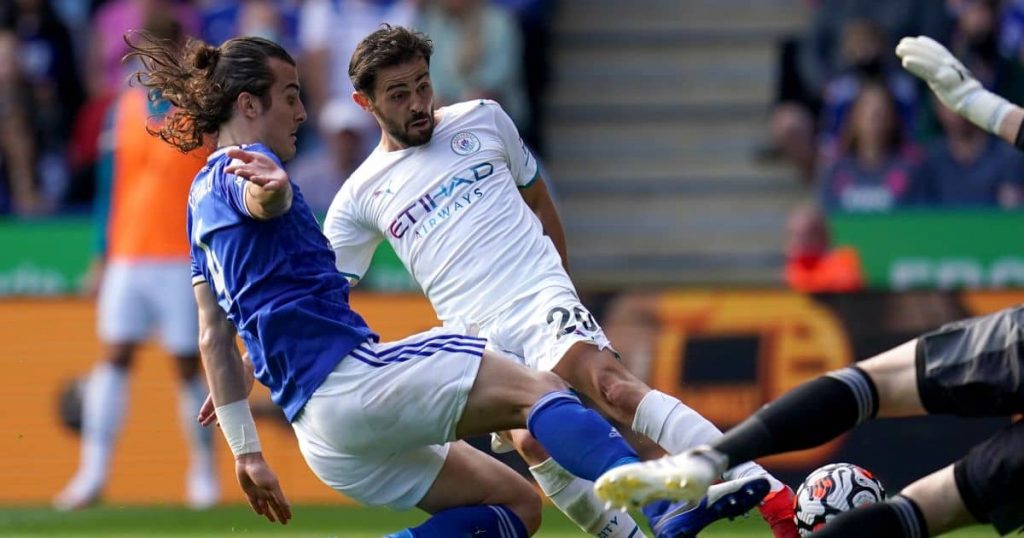 The north-west giants like to spread the goals around their side and the Spaniard is happy with the situation.

“The last 11 goals I think were scored by nine different players,” he continued. “We don’t have a real striker so we do it as a team.”