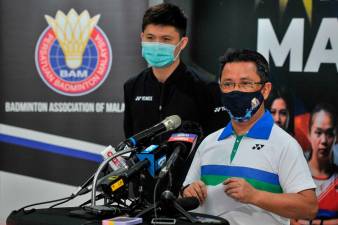 KUALA LUMPUR: Featuring a new squad comprising young players, Malaysia is targeting to reach at least the quarter-finals of the Thomas and Uber Cup which will be held in Aarhus, Denmark from Oct 9 to 17.

Badminton Association of Malaysia (BAM) president Tan Sri Mohamad Norza Zakaria said the same target is also placed on the national team for the Sudirman Cup scheduled to be held at Vantaa, Finland from Sept 26 to Oct 3.

He said the primary focus of BAM is the experience attained by the young players so that the governing body could groom the best squad for the coming Paris 2024 Olympic Games.

“As you know, based on our recent Olympics experience, I think we are very serious about targeting two qualifications for every department (event),” he told a media conference after the Coaching and Training (C&T) Committee meeting at Academy Badminton Malaysia (ABM) here today.

“We (BAM) want to take that challenge because we want to start with a young team,” said Norza who is optimistic the three championships are the best opportunities for BAM to test and identify the potential of the country’s young players.

BAM today issued a list of names for the three tournaments which saw the average age of the team in the Sudirman Cup at 22 with mixed doubles player Cheah Yee See aged 26, being the oldest player.

For Thomas Cup, the average age is 23 years with five players aged 24 while the average age of the Uber Cup squad is 21 and captain Lee Meng Yean, 27, is the most senior player.

“If we look at our young players, Aaron Chia-Soh Wooi Yik who despite being young were able to beat the world’s number one and two pairs. I think the same spirit should be among the other young players,” said Mohamad Norza.

Meanwhile, the final list of players issued by BAM saw Ng Tze Yong, 21 ranked 91st in the world being placed as the men’s second singles player after 2021 All England champion Lee Zii Jia.

In this regard, 19-year-old Go Pei Kee was selected to combine with Lee Meng Yean in the women’s doubles to replace Chow Mei Kuan who announced her retirement after playing the Tokyo Olympics recently.

Following are the list of players in Malaysia’s challenge in the Sudirman Cup as well as the Thomas and Uber Cup: