HIGHS AND LOWS FROM THE EUROS

HIGHS AND LOWS FROM THE EUROS

Euro 2020 has concluded successfully with Italy lifting the cup at Wembley. The Azzurri beat the hosts England on penalties after 120 minutes of nervy football that produced a 1-1 draw. It marked the second European Championships title for Italy. Meanwhile, England had yet another heartbreak at a major tournament as they lost cruelly on penalties. England are yet to open their trophy count at the Euros. This marked the end of a Euro filled with so many memorable moments.

Tell us how this feels, Italy fans!

The very beginning of the tournament was postponed due to the pandemic. It took a year for normalcy to return to some extent in Europe for the Euros to kickoff. When it did, it produced an eerie atmosphere at times due to empty and half-filled stadiums. Nevertheless, the summer mega tournament produced so many magical moments throughout its length. Of course, there were few heartbreaking lows as well.

We at FootTheBall compile the best and worst moments from Euro 2020.

SWISS KNIVES CUT THROUGH THE FRENCH

This game produced what could be called the result of the tournament. In a classic David vs Goliath clash in the round of 16, the underdogs David came on top. World champions France entered the Euros as hot favorites. The names in their squad would strike a dagger in the opposition’s hearts. They cleared the so-called group of death unbeaten despite not playing at their best. Switzerland meanwhile entered the fray as lucky losers behind Italy and Wales from group-A. 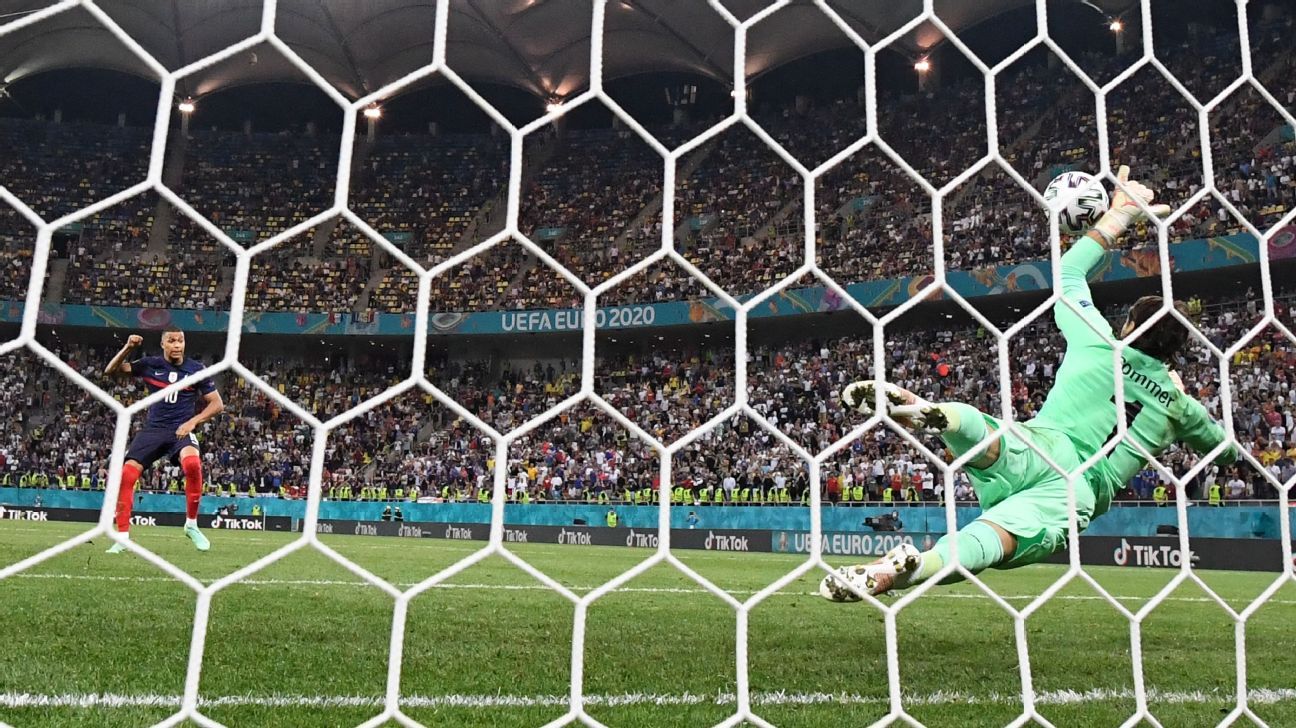 The Swiss made their intention known as Haris Seferovic headed them ahead early in the game. Ricardo Rodriguez had a golden chance to double their lead from the penalty spot in the second half. The full-back missed his chance. France made them pay as their star power shone through. Karim Benzema added a quickfire double in four minutes to turn the game around. Paul Pogba scored a screamer to give them a 3-1 lead 15 minutes from full-time.

Switzerland looked dead and buried with 10 minutes remaining. Haris Seferovic then gave them a lifeline as he swept a counter home. The valiant Swiss forced extra-time as Mario Gavranovic finished a Granit Xhaka through pass down the middle. After a dull 30 minutes of play, penalties were on the menu. Nine top-quality spot-kicks were seen as neither side blinked. Unfortunately, Kylian Mbappe was the villain for France as super Sommer saved his effort and confirmed the upset.

This game turned out to be an instant classic along with Spain vs Croatia thriller earlier in the day.

Denmark came into the tournament with few expectations and few branded them as the dark horses. Their chances took a massive hit as their star player Christian Eriksen collapsed on the pitch due to a cardiac arrest in their opener against Finland. The Scandinavian nation lost the game when it resumed after a stoppage. They showed incredible character in their next match against Belgium but still ended up losing the game.

They needed a miracle to progress and they made their own one in the final match against Russia. Mikkel Damsgaard and Joakim Maehle emerged to take the Danes to the knockouts as lucky losers. They had a winnable fixture in the round of 16 against Wales. The Danes turned up again and played like a world-beating side to trounce Wales 4-0. A 2-0 win in the quarters over the Czech Republic had them dreaming.

Many people were wondering whether this could be a repeat of the 1992 Euro. Denmark entered the tournament as wildcards and shocked everyone by running away with the title. Now they set a semi-final date with England at Wembley. Denmark had a fine start to the game as Mikkel Damsgaard scored a wonderful freekick to give them the lead. However, they failed to see out the game as Raheem Sterling forced an own goal from Simon Kjaer and Harry Kane converted a rebound from his saved penalty to seal the game. Hence Denmark’s almost fairytale ended at Wembley.

Cristiano Ronaldo eats records for breakfast. The legendary Portuguese international is a player who is never satisfied until he’s the best in everything possible. Before the Euros, he was tied with Michel Platini on 9 goals as the joint highest scorer at the Euro finals. Ronaldo wanted to be the single best scorer and also defend his country’s title at the Euros. He created another piece of history just by being named in the lineup. Ronaldo became the first player in Euros history to play at five different finals.

He hoped to make the occasion more joyful by scoring a goal or two. The Selecao faced a dogged Hungary in their group of death opener. The game was level for 80 minutes before Raphael Guerreiro’s deflected strike gave them the lead. Then came Ronaldo’s moment as Rafa Silva won a penalty. Ronaldo stepped up with his famous run-up and sent the keeper the wrong way as he slotted home his 10th goal at the finals. He added one more goal in the dying moments to end the night with 11 goals at the Euros.

He further steered clear of Platini as he added three more goals in the next two games. Ronaldo ended the tournament with 5 goals and an assist to his name as he won the Golden Boot. Though he was at his best, Portugal wasn’t able to defend their crown.

Euro 2020 was a joyride till that unfateful moment. Denmark met Finland in their opener at a packed Parken Stadium, Copenhagen. They made a positive start to the game as Finland were pinned in their own half. When approaching the end of the first half a shocking incident occurred on the pitch. Christian Eriksen, who was going to the touchline to receive a throw-in, collapsed on the pitch.

God has heard the prayers of the entire Football World

The referee Anthony Taylor and Denmark’s Simon Kjaer acted incredibly quickly to aid the fallen man as they resuscitated him instantly. Eriksen received treatment on the pitch immediately from the medics and was rushed to a nearby hospital. The entire stadium was shocked and broke down in tears after seeing their beloved player suffer a cardiac arrest on the pitch. After the initial diagnosis, it was found that Eriksen was fine.

However, with some medical experts hinting at an end of playing career, would coaching be next on the cards?

The nation held their breath and were praying for the Danish hero. Eriksen duly recovered and answered all their prayers. He urged his Danish teammates to make him proud. The team took his word seriously and outdid themselves to reach the semis.

Belgium’s Golden Generation arrived at another major tournament with high expectations. The side assembled in 2008 were reaching their pinnacle as many key players were hitting their 30s. The Red Devils failed to win anything tangible as they fell short at the 2014 and 2018 World Cup along with the 2016 Euros. Suddenly they were running out of time and felt the urge to win this Euro.

Belgium started in proper champions fashion as they routed Russia 3-0. They showcased their credentials yet again as they came from behind to win 2-1 against Denmark. A victory against Finland sealed the top spot and set up a mouthwatering round of 16 game with defending champions Portugal. Belgium ground out a 1-0 win as Throgan Hazard’s sensational effort proved to be the difference.

Time running out for Belgium

It looked like it was Belgium’s time finally as they looked set to lift the title. They met a tough and eventual champions Italy side in the quarters. Italians exploited the chinks in Belgium’s armor as they showed the Golden Generation was truly aging. Italy’s attacking flair was too much to handle for a tired Belgian defence. The Red Devils were edged 2-1 by the Azzurri.

It’s Coming Home was the only chant one would truly hear in Wembley ahead of England’s final with Italy. After suffering a number of heartbreaks, England were ready to win the Euros for the first time in their history and bring the title home. They had lady luck on their side and a strong home advantage as they coasted to the finals easily.

More than a team. We’re family.

We’ll stick together no matter what. pic.twitter.com/1p4CJNHWXY

The party night started in a glorious fashion as Luke Shaw volleyed a Kieran Trippier’s cross to give the Three Lions the lead. England, who had a stern defence, were just a clean sheet away from eternal greatness. However, Italy’s old guard Leonardo Bonucci responded as he turned home an effort from close range to force extra time. Both sides were pragmatic in their approach and settled for penalties.

Domenico Berardi made a good start to the penalties as he converted the first kick. Harry Kane duly followed his example. Andrea Belotti missed his effort and Harry Maguire smashed it to the top bins. England’s fortunes turned after this point. Bonucci converted his kick to level it shortly for 2-2. Manchester United’s Marcus Rahsford and Jadon Sancho missed their efforts to hand Italy the advantage. Federico Bernardeschi swung the pendulum in Italy’s favor. The ever-reliable Jorginho missed his penalty to keep England in the game. The onus fell on Bukayo Saka’s tender shoulders to keep them afloat.

The 19-year-old went to his right with a tame effort that was easily saved by Gianluigi Donnarumma. The youngster dropped in despair as he handed Italy the title. England were agonizingly close to the glory and ended up without it.

The post HIGHS AND LOWS FROM THE EUROS appeared first on FootTheBall.