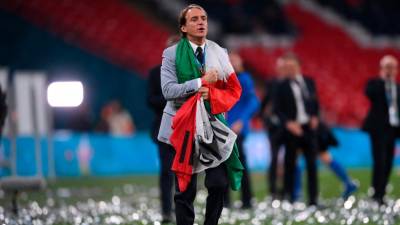 “We did well. We conceded a goal straight away and struggled, but then we dominated the game,“ Mancini told RAI Sport following the 3-2 win on penalties after the match ended 1-1 after extra time.

“The lads were wonderful, I don’t know what more to say. It’s important for all the people and all the fans.

“I hope they’re celebrating (in Italy).”

Leonardo Bonucci cancelled out Luke Shaw’s half-volley in the second half, and the two teams could not be separated in extra time.

It went to a shoot-out, with Gianluigi Donnarumma making two decisive saves after Marcus Rashford hit the woodwork.

Italy won the title for the second time after 1968.

“It’s incredible, when I think back to where we started,“ said 34-year-old defender Bonucci.

Italy are now on a 34-match unbeaten run, bouncing back in style after suffering the humiliation of failing to qualify for the 2018 World Cup.

“When you are at the bottom of the hole, you see how great men regain their strength,“ Bonucci added. “I want to say thank you to our great coach, our great team, our great country. We are full of joy and happiness.”

Captain Giorgio Chiellini said “there was something magical in the air” since the tournament kicked off in Rome a month ago.

“A few tears fell. We all deserved it, at this age we realise even more what it means to win such a trophy,“ said the 36-year-old.

“We have been saying that something magical is in the air since the end of May, day after day.”

“We were amazing, we didn’t give up an inch. We did it from scratch, we are a fantastic team and we deserve this success,“ said Donnarumma.

“The goal could have killed us, but we always remained vigilant and never give up.” – AFP