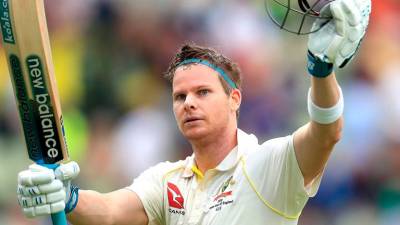 MANCHESTER: Australia star batsman Steve Smith (pix) is set to undergo a fresh concussion test before the second one-day international against England after being ruled out of Friday’s opener at Old Trafford in bizarre fashion.

Smith was sidelined from the first of a three-match series after being hit on the head batting in the nets, from a delivery by one of Australia’s fast bowlers, but rather a throw-down from a member of the coaching staff.

An Australia team spokesman said Smith was being rested as a precaution despite passing a concussion assessment and would have another such test on Saturday ahead of Sunday’s second ODI.

“Steve Smith got a knock on the head yesterday (Thursday) in practice so it’s a precautionary measure to leave him out,” Australia captain Aaron Finch told Sky Sports at the toss. “(Marcus) Stoinis will bat at three.”

Despite missing the third Test at Headingley, Smith still scored 774 runs, including three hundreds, at an average of over 110 during a five-match series that ended all square at 2-2.

In the 31-year-old former captain Smith’s absence, Australia slumped to 123-5 inside 24 overs on Friday after losing the toss.

Stoinis was well caught by diving wicketkeeper Jos Buttler off fast bowler Mark Wood for 43, featuring six fours. Then both Labuschagne (21) and Alex Carey (10) fell to leg-spinner Adil Rashid in what was Australia’s first one-day international against England since an eight-wicket defeat by the eventual champions in last year’s World Cup semifinal at Edgbaston. – AFP