RB Leipzig are languishing in 13th place in the German league after their latest defeat to Bavarian giants Bayern Munich on the fourth matchday of the season in the Bundesliga.

Manager Jesse Marsch remains clueless about solving Leipzig’s woes in Germany after they lost 3 of their opening 4 matches in the German top-flight. Part of the reason for the floundering of their season until now has been linked to high-profile departures in the summer. 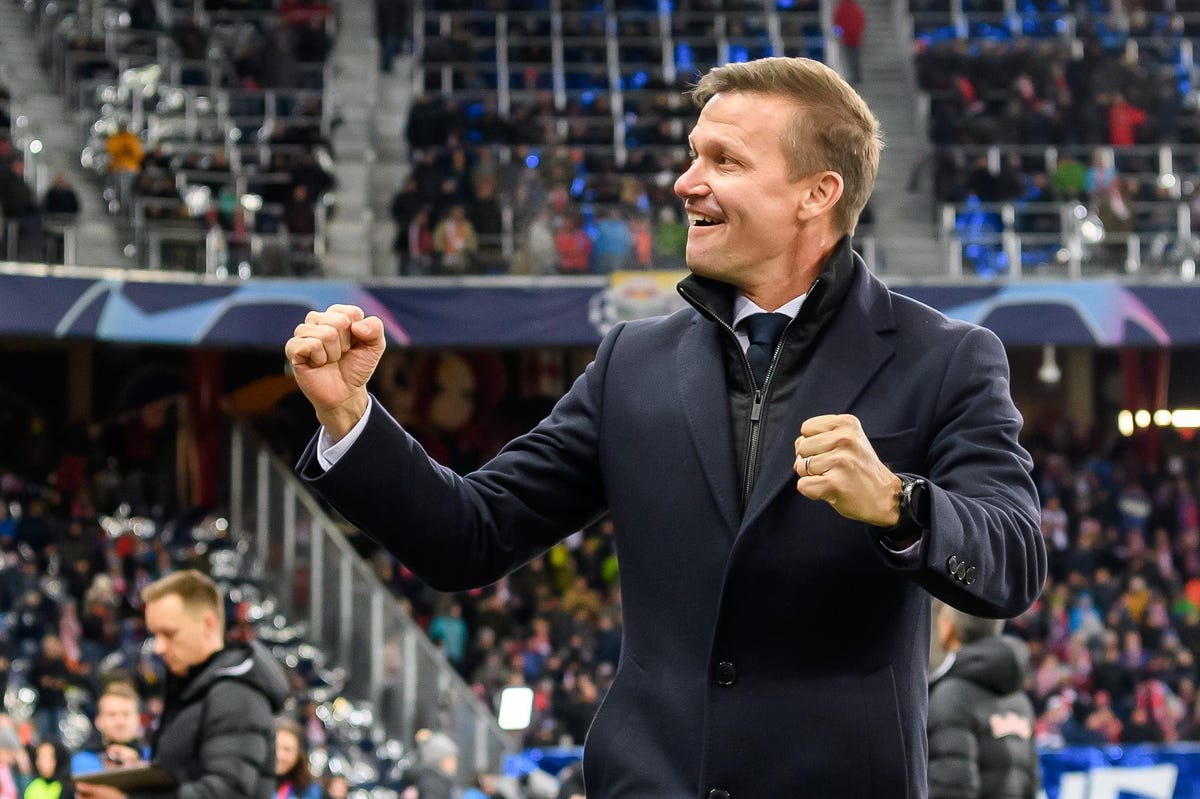 Jesse Marsch is seemingly the captain of a ship that is floundering at sea, and he must urgently do something about it (Image courtesy – Forbes website)

RB Leipzig have a lot of answers to find after finding themselves in a dismal and pitiable condition in the Bundesliga, even behind newly-promoted side VfL Bochum.

As RB Leipzig undergo a torrid time in the Bundesliga, FootTheBall analyses the reasons for the struggles of Die Roten Bullen in Deutschland.

EXODUS OF KEY FIGURES HAS A TELLING IMPACT IN LEIPZIG

In the previous season, RB Leipzig were in the running for the prestigious Bundesliga title alongside heavyweights like Bayern Munich and Borussia Dortmund, finishing runners-up to the Bavarians in the league.

At the same time, they finished as runners-up to Borussia Dortmund in the German Cup final to mark the end of a highly successful, albeit trophyless, season in Germany. But, the conclusion of the season was swiftly followed by the departures of manager Julian Nagelsmann and French defender Dayot Upamecano to Bavaria.

Jesse Marsch came to replace his German predecessor in Saxony, but so far has failed to replicate the results achieved under Nagelsmann in Leipzig.

The city in Saxony is famed for the Battle of Leipzig in 1813 (part of the greater Napoleonic Wars in Europe) in which the French emperor’s Grand Armee was decimated ruthlessly and driven back to France by the combined forces of the Sixth Coalition.

In a similar manner, Leipzig’s boat has capsized in Germany following the departure of Julain Nagelsmann, Dayot Upamecano and former skipper Marcel Sabitzer.

One can also draw inferences here, as Nagelsmann can be equated with the captain of the boat with Marcel Sabiter acting as first mate, while Dayot Upamecano can be seen as the person in the crow’s nest, averting danger at sea.

Now that everyone has deserted their positions on the boat, it is inevitably capsizing in the vast ocean of the German league continuously.

Reinforcements have been brought in, but until now they have proven to be ineffective (case in point the managerial manoeuvring of Jesse Marsch in troubled waters).

And it doesn’t look like the going will get easy anytime soon for Die Roten Bullen, either in Germany or in Europe. Their next match is in the Champions League against Pep Guardiola’s English champions Manchester City with games against Paris Saint-Germain to come soon too in Europe’s premier club competition.

Die Roten Bullen need to find a solution in an efficient manner if they have any hope of salvaging a pretty disastrous campaign until now. Changes brought in bits and pieces will only exacerbate the need of the club to take some swift and decisive action.

“It’s always difficult against Bayern; they have a lot of quality and showed that today. We didn’t play badly and gave it everything.

With a little bit more luck and more composure in the final third, it could have been a different game.”

Therefore, they must make do with whatever resources and personnel they have with them and wait for the winter transfer window to open in order to make some key acquisitions in order to recoup lost ground in the wake of the departures of Nagelsmann, Sabitzer and Upamecano in Saxony.

Jesse Marsch needs to exhibit and instil a belief in the team set-up that would enable them to cope with the exodus of three of the most important cogs of the club until the winter transfer window commences in January next year.

Much of what Marsch does will be defined by the results in the Champions League and favourable results against the creme de la creme of Germany in the domestic league. The foremost aim of the club should be to make a place for themselves in the top half of the league table in Germany.

Things didn’t click on the pitch and the result wasn’t there, but the fans were flawless! Thank you

And then, step by step they should focus on avoiding a bottom-place finish in Champions League Group A, which would at least see them being transferred to the Europa League rather than being ousted from Europe altogether at once.

The rebuilding phase, as is natural, will take a significant amount of time as Leipzig navigate the corridors of Germany in pursuit of their former glory that was swooped up by their more affluent and illustrious domestic league rivals this summer in Germany.

“We are not now that strength which in old days,

That which we are, we are;

One equal temper of heroic hearts,

Made weak by time and fate, but strong in will

To strive, to seek, to find, and not to yield.”