Leicester scored twice in two second-half minutes late on as Alisson produced another clanger as the hosts earned a 3-1 win over Liverpool at the King Power Stadium on Saturday lunchtime.

A brilliant piece of skill from the under-fire Roberto Firmino created the opening for Mo Salah to whip in his 17th goal of the season. And that looked like being the crucial goal until James Maddison’s free-kick crept all the way in.

Initially ruled out, VAR awarded the goal and then as shocking decision by Alisson to come out of his goal allowed Jamie Vardy to run in the winner. Harvey Barnes then made it 3-1 on 85 minutes.

It was a result which meant the champions’ have now lost three straight games in Premier League in what was Jurgen Klopp’s 300th Liverpool match.

Ozan Kabak was handed his Liverpool debut for the Reds’ crucial trip to Leicester.

The on-loan Schalke defender started, with Fabinho out of the trip with a muscle injury. Thiago was on the bench for the visitors.

Wilfred Ndidi returned to the Foxes’ Premier League line-up after injury, with Daniel Amartey at the back after James Justin suffered a serious knee injury.

Liverpool dictated the opening half an hour although lost James Milner to injury, with Thiago replacing him in the 17th minute.

Kasper Schmeichel made a huge save from Firmino, who was six yards out. Jordan Henderson crossed from the left, Sadio Mane flicked it on for Firmino, whose side-foot volley was smothered. The offside flag was up though.

Jamie Vardy had a fine chance in the 36th minute when he planted a free header at Alisson.

The striker also looked marginally offside when he collected James Maddison’s backheeled flick and clattered a shot against the crossbar.

Liverpool came close to breaking the deadlock on 57 minutes.

Roberto Firmino with a contender for assist of the season

Mo Salah’s finish was top class too, what a beautiful goal for Liverpool! pic.twitter.com/wj0tLvFMH6

Trent Alexander-Arnold whipped a free-kick, which clipped someone in the wall and cannoned back off the crossbar with Schmeichel beaten.

The champions did take the lead though 10 minutes later.

Alexander-Arnold saw a shot blocked, he got a second bite of the cherry with a cross which came back to Firmino, who brilliantly tricked two defenders with a drag back before flicking the ball to Salah, who curled home from just inside the penalty area. 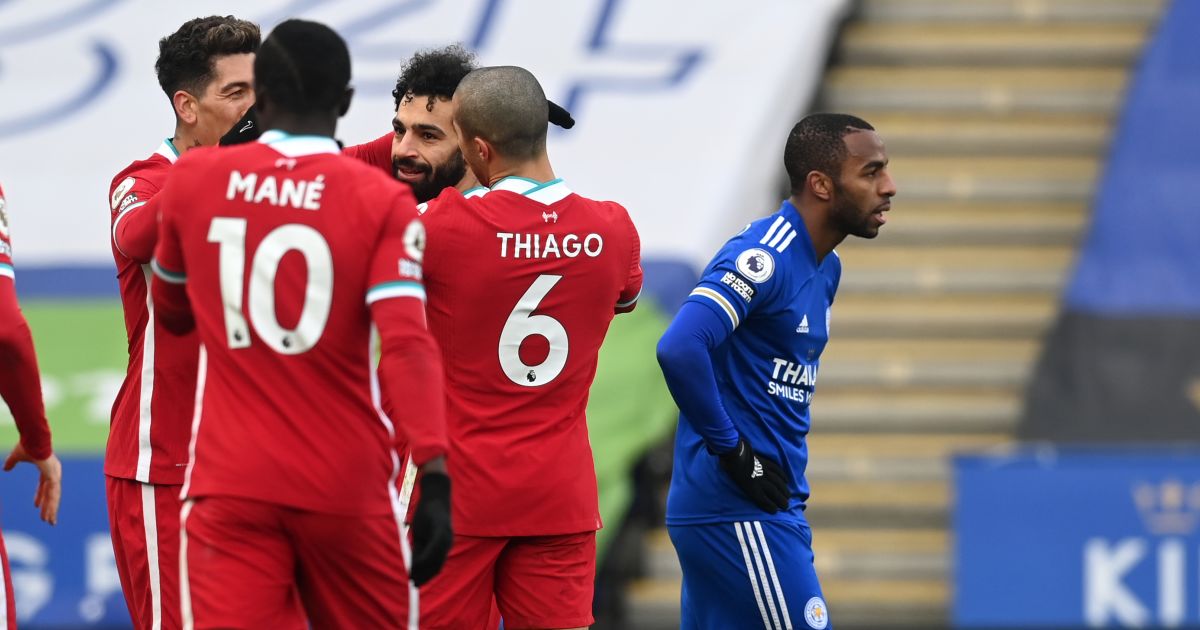 Leicester though levelled on 80 minutes. Leicester thought they had a penalty but a free-kick was given on the edge of the box and Maddison’s free-kick into the goalmouth missed everyone and ended up in the net. It was originally ruled out for offside, but after VAR checked it the goal stood.

And two minutes later Leicester were ahead after a routine long ball forward. Kabak and Alisson, who came charging out, got too close and collided leaving Vardy with the simple task of running the ball into an open net.

Wilfred Ndidi then played in Barnes behind an increasingly absent Liverpool defence before he slotted across Alisson.

The post Alisson clanger sends Liverpool to another defeat in landmark game for Klopp appeared first on teamtalk.com.