Penang to give RM10,000 incentive each to two olympic-bound athletes

Penang to give RM10,000 incentive each to two olympic-bound athletes 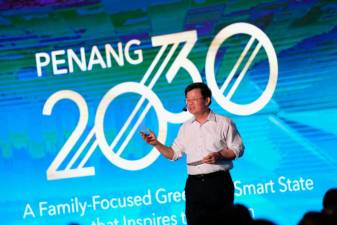 GEORGE TOWN: Penang has decided to present an incentive of RM10,000 each to the two athletes from the state who are part of Malaysia’s contingent to the Tokyo 2020 Olympic Games.

In a statement yesterday, Chief Minister Chow Kon Yeow (pix) said the incentive was to encourage the two athletes, Chan Peng Soon and Jeremiah Loo Phay Xing, to do well at the world’s biggest sporting event.

“I believe that their success can lift our spirits, dreams and desire to sustain the development of prestigious sports and strengthen the role and talent of human capital in achieving the Penang Vision 2030.

“Although the Tokyo 2020 Olympics has not yet begun, the important thing is their efforts and success in representing the country and Penang have fuelled the spirit of sportsmanship and the people’s hopes for Malaysia to win its first ever gold medal,“ he said.

Shuttler Chan and artistic gymnast Loo are among 30 athletes who will be representing Malaysia in the Games, scheduled to take place from July 23 to Aug 8.