Premier League is already a four-horse race but who will come out on top out of Man Utd, Chelsea, City and Liverpool?

Premier League is already a four-horse race but who will come out on top out of Man Utd, Chelsea, City and Liverpool?

IT ONLY took four games for the ‘Big Four’ to become the top four.

And while the next few weeks could see some outsiders break back into the Champions League spots, the expectation is that the Prem winner will come from Chelsea, Liverpool and the Manchester giants.

But which of them is best placed to wear the crown in May?

SunSport analyses England’s prime quartet, assesses their strengths and weaknesses and tries to come up with the answer…

Pep Guardiola’s side certainly know how to win the title and proved it last term as they came from a lowly 13th after they lost at Spurs in November to win with three games to spare and finish 12 points clear.

Any punter knows that course and distance winners are worth following and that is exactly what three titles in the last four campaigns makes City.


Champions League betting offer: Get £60 in free bets with 888 Sport

Guardiola’s determination to dominate possession and pass opponents to death has been a feature of his teams since he took charge at Barcelona in 2008-09 and that has not changed at the Etihad.

The Catalan found the defensive resilience he was looking for with the arrival of Ruben Dias and had a spare £100million this summer to land Jack Grealish from Aston Villa.

Any team with a fit and firing Kevin De Bruyne has a chance in every game and City’s attacking armoury, also including Gabriel Jesus, Barnardo Silva, Riyad Mahrez, Raheem Sterling, Ferran Torres, Phil Foden and Ilkay Gundogan, is enough to make anybody jealous.

The obvious issue – who is going to lead the line?

City spent all summer on the ‘brink’ of signing Harry Kane – and surely guaranteeing 25-plus goals and a double-figure assist tally – but did not make the bid which would have got it over the line.

That puts a big onus on Gabriel Jesus and Ferran Torres to fill the void that was effectively left by Sergio Aguero 12 months before he actually quit the club.

Manchester City have an abundance of attacking talent but will failing to land Harry Kane cost them?[/caption]

The title last term suggests it does not matter – but in the really big games, when you need one goal, it’s surely easier if you have a natural marksman.

One other issue might be Guardiola’s relentless desire to test himself and over-complicate matters.

Would City have lost the Champions League final against Chelsea with an actual striker on the pitch? We cannot ever say…

The sheer excitement at Old Trafford on Saturday to mark the return of Cristiano Ronaldo was a sign of renewed expectations among the United faithful.

Ole Gunnar Solskjaer’s side were second last term – that seems to have been forgotten by too many – and Ronaldo gives them an emotional boost as well as a genius of a player, even at 36.

It is hard to resist the belief that CR7 will be worth eight to ten critical points in the latter stages of tight games, especially against teams just piling up defensive bodies in front of their net.

Ronaldo gives something extra too, to a side which already had Paul Pogba, Bruno Fernandes, the emerging Mason Greenwood and with Marcus Rashford recovering from his summer surgery.

Equally important could be the arrival of Raphael Varane to play alongside Harry Maguire at the back, while David De Gea looks to be regaining his confidence.

If titles are only won by proven winners, United start with a disadvantage despite Solskjaer’s stellar history as an Old Trafford player.

Rivals are keen to mock the Norwegian, reaching a new level after the Europa Cup Final defeat to Villarreal.

But more critical, arguably, is the United engine room.

You can take any two from Scott McTominay, Nemanja Matic and Fred and struggle to put together a duo to win the biggest games.

And if Pogba drops into the central two, he looks far from happy – his wings are clipped and he fails to be the player he wants to be.

Those away games at Southampton and Wolves brought four points but were distinctly underwhelming.

It is unclear how Ronaldo’s arrival has cured that key issue.

Virgil van Dijk’s absence from most of last season was a huge blow and with injuries also robbing Jurgen Klopp’s side of Joel Matip and Joe Gomez for long periods, it was no wonder their form fell off a cliff after Christmas.

Having them back makes a massive difference while also allowing both Trent Alexander-Arnold and Andrew Robertson to play their natural games on the flanks.

Their returns also mean that Klopp can deploy Fabinho in his best position, in the middle of the park, rather than having to plug holes at the back.

Klopp added Diogo Jota last term, giving him an extra attacking option if any of Mo Salah, Sadio Mane and Roberto Firmino are not firing. He can play all four, as well, if needed.

Liverpool believe that the Anfield factor will also make a difference – sometimes it can be a mental thing that you feed off, rather than anything concrete.

It was evident that they lost something at home in the second half of last term.

There are concerns about Mane’s form, which grew over the year. He has to find his game.

In addition, while Salah remains a goal threat in every match, Firmino netted just nine in each of the last two seasons.

If Mane and Jota cannot score their share of goals, Firmino’s relative lack of threat may become more of an issue.

It looked as if Harvey Elliott might be the answer to the questions left by Gigi Wijnaldum’s departure to PSG but the youngster now faces months on the sidelines.

And while there were positives in the display of Thiago Alcantara at Leeds, nobody could pretend the Spain midfielder has been a success in his time on Merseyside.

Similarly, Naby Keita has seemed a fish out of water throughout much of his spell at the club and Takumi Minamino has yet to make any sort of impact.

Jordan Henderson missed a huge chunk of last season and may need to be managed this term while Curtis Jones appears to have fallen out of favour.

That midfield issue is a big one, which Klopp has to solve.

Even more of an issue, though, could be the African Nations Cup in January. That could deprive him of Salah, Mane and Keita for up to a month.

Signing Romelu Lukaku looked like the missing piece in a potential title jigsaw for Thomas Tuchel.

Certainly the Blues boss believes he has pulled off a major coup, while his deadline day capture of Saul Niguez was all about adding to his midfield options, rather than about filling a weakness.

Tuchel transformed the mindset, mentality and belief of the Chelsea squad that looked to be disappearing down the plughole of self-doubt in the latter days of the Frank Lampard reign.

The transformation was remarkable, culminating in that night of glory in Porto as Tuchel beat Guardiola off the pitch as smartly as his team won the key battles on it.

Now Tuchel knows the target is regaining the title Chelsea last won under Antonio Conte in 2017 and he believes Lukaku’s goals will prove the difference when it really matters.

Tactically, Tuchel has the players and the strength in depth to switch defensive shape as he feels necessary, with the rebirth and growth of Andreas Christensen, who looked to be on his way out of the club at one point, a huge plus.

Likewise, there is trust in keeper Edouard Mendy, midfield possibilities aplenty, and thrust and dynamism through Kai Havertz and Christian Pulisic.

So far, it seems, even Tuchel, who knows Timo Werner better than anyone, cannot get a tune out of the German striker.

That could go two ways, of course, depending on Werner himself and it is critical that any problems he has do not spill over.

But more of an issue is finding a solution if Lukaku is injured, suspended, or, in the Covid era, otherwise absent.

The danger is that Tuchel’s side become reliant on the broadside and neglect the rapier. Do they know how to break a team down if Plan A does not work?

Another thing that could become interesting to watch is Tuchel’s sheer intensity.

Conte’s decline and fall was partially about the way he hammered his players to the point when they stopped listening.

Even the most successful dressing room wants, at times, to feel loved. It is human nature.

Tuchel is not, by nature, a man of warm words. He expects his players to be as utterly focused as he is himself. And, well, it IS Chelsea…

What I hope is that we are still asking the same question – who will win the title? – in April, rather than already knowing, as we have for the past two seasons.

The early signs are very much that all four are up for the fight.

Of course, the disruptions of World Cup qualifiers, Europe and  – in January – the African cup of Nations could transform the picture.

As could a key injury. If Lukaku gets injured, is that curtains for Chelsea? What happens to City if Dias gets crocked?

But nobody can foretell random events which may or may not happen. 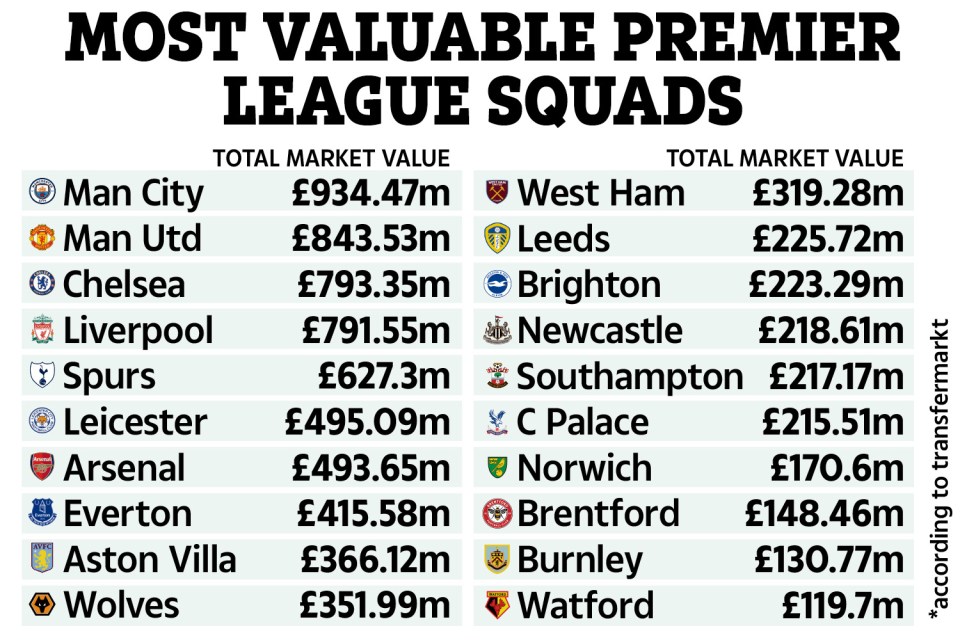 As somebody without a dog in the race, though, I can see dark blue ribbons being lifted in May.