As Liverpool’s need to sign a new centre-back in January becomes ever clearer, a report on Friday has revealed how highly Jurgen Klopp rates Napoli star Kalidou Koulibaly.

Joe Gomez has joined Virgil van Dijk in potentially missing the rest of the season after suffering a serious knee injury.

The England star suffered a damaged tendon in his left knee while on international duty on Wednesday.

And England boss Gareth Southgate has revealed the awkward conversation he held with Klopp when he broke the news.

With first-choice duo Van Dijk and Gomez now out indefinitely, that leaves the Reds with a combination of Joel Matip, Fabinho and youngsters Nat Phillips and Rhys Williams to cover the position.

To that end, the Anfield outfit are expected to make a splash in the January transfer window.

Bayern Munich’s David Alaba has been hotly tipped to make the move to Merseyside. Meanwhile, two more Bundesliga stars are also said to be on their radar.

We revealed on Thursday that former Watford defender Daryl Janmaat is also being considered. The free agent can cover right-back and centre-back and has received a glowing reference for Holland teammate Gini Wijnaldum.

However, a report in the Daily Mirror, as cited by the Daily Express, has revealed just how highly Klopp rates Napoli star Koulibaly.

The Senegal ace has been a Liverpool target for some time, with Manchester United also admirers.

The 29-year-old is very much considered an elite answer to Liverpool’s defensive woes. That is in comparison to someone like Janmaat, who is very much a stop-gap measure.

Koulibaly has racked up over 250 appearances for Napoli since 2014, after previous spells with Metz and Genk.

The duo are international team-mates and they have also played together at club level at Metz.

Mane said of his compatriot in the summer: “Kalidou Koulibaly is an excellent defender, and one of the world’s best in his position.

“I would be very happy to play alongside him at club level, as I have known him for years.

“We first got to know one another at Metz before meeting up once more in the Senegal national team. 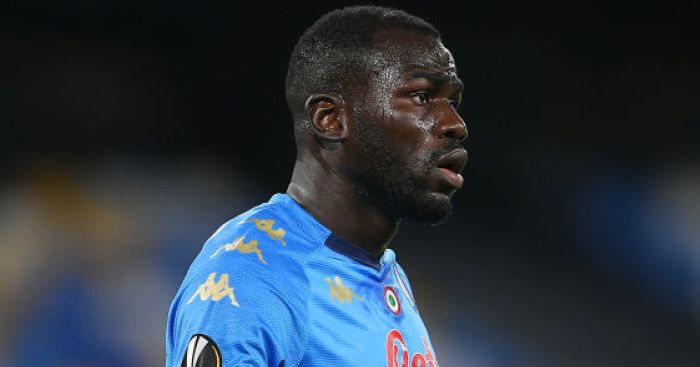 “No club could refuse the chance to have Koulibaly in their squad.

“In any event, it would be a pleasure for me to play for Liverpool together with him. He would be more than welcome here.”

Napoli, however, would likely demand a fee of more than £60m for one of their star men.

That could still represent somewhat of a bargain, with his price tag previusly closer to £90million.

But it still leaves the Reds in a bit of a quandry over whether to splash out on a big name, knowing that Van Dijk and Gomez will eventually return, or taking a gamble with what they have.

READ MORE: Former Liverpool loanee Steven Caulker has issued an amusing response to claims he could return to Anfield to ease their central defensive crisis.

Tottenham duo proving to be one of the best in Europe