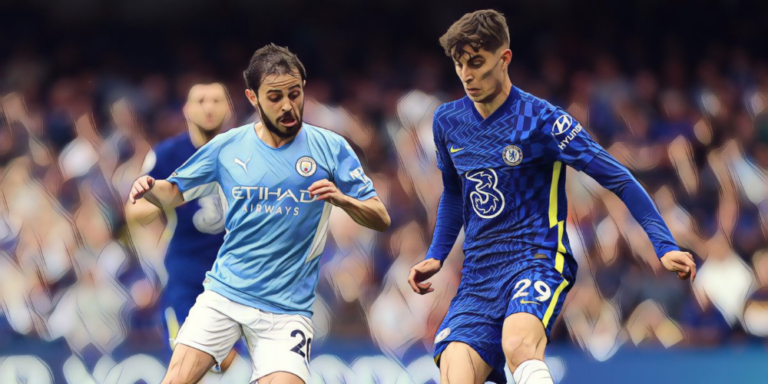 Manchester City meet Chelsea in the Premier League this weekend, a clash between the division’s top two and one that could all but end the season’s title race.

City have been in imperious form in recent weeks to open up a 10-point advantage over the west Londoners, winning 11 consecutive league fixtures as Pep Guardiola’s side march towards a third title in four seasons.

Chelsea travel to the Etihad this weekend in need of a positive result and ahead of the clash we’ve compiled a best combined XI from the two squads.

We’ve chosen only players available for selection this weekend in our combined side, with Edouard Mendy’s participation at the Africa Cup of Nations making this an easy selection.

It can be easy to forget how good a goalkeeper Ederson is given his relative comfortability behind the division’s best defence, but the Brazilian remains one of the finest number ones in the Premier League.

Ederson has kept a huge 82 clean sheets from just 165 league appearances for Man City, winning the Premier League’s Golden Glove in each of the past two seasons.

It is, however, his distribution that has made Ederson a unique talent and transformative signing, with his kicking in particular perhaps unrivalled amongst the world’s leading goalkeepers.

Kyle Walker returned for Manchester City in the club’s FA Cup win at Swindon last week and the right-back will hope to regain his regular role in the side after a spell on the sidelines.

The England international has been a stalwart of City’s recent successes under Guardiola, evolving into a more complete footballer under the Spaniard’s tutelage.

The once buccaneering full-back at Tottenham has fine-tuned his game at the Etihad, equally comfortable racing down the outside to provide width or tucking inside to create midfield overloads and aid Guardiola’s possession-dominant demands.

Ruben Dias’ immediate impact at Manchester City saw the centre-back named as the FWA Footballer of the Year last season, having immeasurably improved his side’s defence as the club regained the Premier League title.

The Portugal international has become a leader in the City side and provides a reassuring presence, often remaining the constant as John Stones, Aymeric Laporte and Nathan Ake rotate the role as his partner.

Ruben Dias has kept more clean sheets than any other centre-back since he made his Premier League debut:

And now he’s popping up with goals and assists.

His comfortability in possession is also key given City’s dominance of the ball, with Dias ranking third in the Premier League for touches this season and second for progressive carrying distance.

The Germany international has been rejuvenated under Thomas Tuchel at Stamford Bridge, excelling in the club’s back three system and starring during Chelsea’s run to Champions League success last season.

Rudiger provides a fine cocktail of defensive nous, menace and general shithousery – a defender who leaves it all on the pitch and who will be missed next season should Chelsea fail to agree terms on a contract extension.

Joao Cancelo has evolved into one of the Premier League’s most complete footballers across the past two seasons, a full-back in name but a player whose roaming brilliance has become key to his side.

The 27-year-old also ranks amongst the league’s leading players for interceptions, shots and progressive carries, an indication of the multi-faceted talents he has brought to the Etihad this season.

N’Golo Kante remains irreplaceable for Chelsea and will be crucial to their chances this weekend, the all-action dynamism of Kante set to play a major role in stifling the Manchester City midfield.

Kante rarely produces a bad performance and his mix of ball-winning ability and forward drive will be central to Chelsea’s game-plan at the Etihad.

Injury issues have perhaps prevented Kante from a sustained run of his unique brilliance but when at full fitness he remains one of the Premier League’s – and Europe’s – best midfielders.

Rodri deserves a honourable mention given his career-best season in City colours this term, but the Spaniard is edged out by one of the best of his generation.

Kevin De Bruyne has failed to hit the heights of past seasons in 2021/22 so far, but the Belgian remains one of the Premier League’s finest footballers.

Chelsea’s sale of the midfielder must remain a decision that still rankles at Stamford Bridge, particularly given how the 30-year-old has flourished against his former side with four goals scored against the west Londoners.

When @DeBruyneKev came back to haunt Stamford Bridge

De Bruyne has somewhat gone under-the-radar to score five goals from 10 league starts this season, whilst his expected assists per 90 minute (0.41) is the best in the Premier League.

That the league leaders have performed so impressively without the back-to-back PFA Player of the Year hitting top form is ominous for the sides bidding to catch them.

Manchester City’s Player of the Season so far, Bernardo Silva’s return to his best has been a welcome boost for Pep Guardiola this season.

After speculation surrounding his future and desire for a new challenge, the midfielder has since sparkled for the Premier League champions this season to reestablish himself as one of the league’s leading lights.

Ready to run himself into the ground for the cause but with poise and panache in the final third, he is perhaps the perfect player for Guardiola and arguably the first name on the team sheet.

Riyad Mahrez’s scintillating form before departing for Africa Cup of Nations duty would have seen him in strong contention to feature here, but we’ve sided with Mason Mount in a position tucked inside from the right.

No English player has provided more goal involvements this season than Mount, who has already matched his best goal (7) and assist (5) hauls in a Premier League campaign with almost half of the season remaining.

Mount has been amongst Chelsea’s most consistent performers and has been on a continued upward curve since first being handed his chance at Stamford Bridge.

Phil Foden is the sort of footballer fans of English football have yearned for in past decades, with his technical gifts and ability to thrive in small spaces having a quite continental feel.

Hailed as the future for some time, the present of Foden is still quite brilliant. Whether used as a false nine, as a wide player or in a deeper midfield role the 21-year-old finds ways to impact games.

This season he has provided 13 goal involvements (7G, 6A) in just 14 starts in all competitions and whilst Guardiola has taken a patient approach in the past, it is difficult to make an argument against Foden being a part of Manchester City’s best XI.

Romelu Lukaku’s ill-advised interview with Italian media was perhaps the most notable moment of his return to Chelsea so far, but when choosing a centre-forward for our combined side there really is no player who can hold a candle to the burly Belgian in terms of goal record.

Lukaku has scored 259 goals in his club career to date with a further 68 in 101 caps at international level, a quite remarkable return for a forward who will not turn 29 until May.

Lukaku is back in the goals for @ChelseaFC

The interview with Sky Sports Italia claimed that City had made an approach to sign him from Inter Milan during the 2020 summer transfer window and a strong performance against his alleged former suitors will go some way to repairing relations with the Chelsea fans.

Thomas Tuchel has failed to get the best from Lukaku so far this season and solving that conundrum will go a long way towards Chelsea’s hopes of catching this weekend’s opponents.

Read – Man City are not eradicating competition at the top, they’re just better than the rest