THERE will be more than just young pop stars on the stage at Tuesday’s Brit Awards – one act will be older than all of the eight other performers combined.

I can reveal the Faces will reunite at London’s O2 Arena, with drummer Kenney Jones and Ronnie Wood joining Rod Stewart to be part of his set, which will close the ceremony.

They last performed at the Brits in 1993, joined by Rolling Stones rocker Bill Wyman, and Rod proclaimed there was collectively “234 years up here on stage”.

And although they will this time be without Wyman and the late Faces keyboardist Ian McLagan, they still add up to 218. Original Faces bass guitarist Ronnie Lane died in 1997.

Harry Styles, Dave, Lizzo, Mabel, Stormzy, Lewis Capaldi, Celeste and Billie Eilish are also on the line-up for the 40th annual ceremony, with their combined age totting up at 193 — 25 years younger than the Faces.

A ceremony insider said: “Getting an icon on the line-up like Rod was a triumph to begin with. Getting the Faces back together is unbelievable.

“It’s an amazing thing to round out the 40th ceremony given they have had such illustrious careers.”

They played their first show together in four years last September when they gave a surprise concert at Wentworth Golf Club in Surrey in aid of The Prostate Project charity, following Rod’s revelation he’d secretly beaten the illness.

It will be their first big TV gig for the trio since they last played at the ceremony 27 years ago, when Rod was honoured with the Outstanding Contribution Award.

Luckily for Faces fans, Rod will be joined by Rolling Stones rocker Ronnie Wood and drummer Kenney Jones for part of his performance[/caption]

The Brits, hosted by Jack Whitehall, will air live on ITV from 8pm on Tuesday but there’s even more action in store.

The ceremony has partnered with youth video app TikTok which will stream an exclusive red carpet performance from Lewis Capaldi — available on the app and on the screens in London’s Piccadilly Circus — before he takes to the stage inside.

KAREN Gillan had a brilliant year with starring roles in Avengers: Endgame and Jumanji: The Next Level.

But 2020 is looking even brighter for the Scottish actress, especially if her dress is anything to go by.

Karen dazzled in this gold gown at the LA premiere of The Call Of The Wild at the El Capitan Theatre.

She isn’t due to reprise her role as Nebula in Guardians Of The Galaxy Vol. 3 until next year, so Karen can now enjoy a well-earned rest. 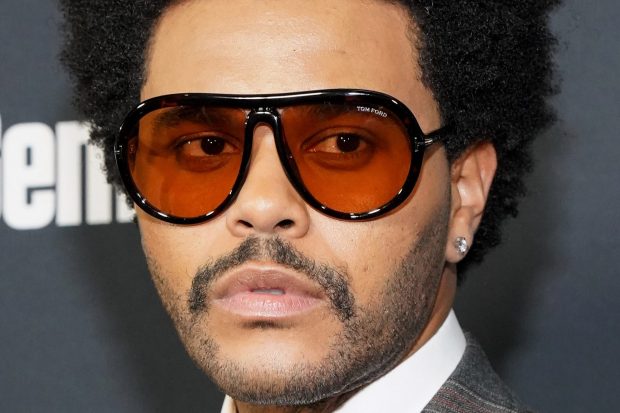 THE Weeknd has scored a second week at No1 with Blinding Lights, which has shifted 11,000 more than its nearest competition, The Box, by Roddy Ricch.

The song will be on his fourth album, After Hours, announced this week.

US rapper Saint JHN’s Roses is up to No8, four years after its first release. A remix has got it new recognition and it’s just behind Someone You Loved, by Lewis Capaldi.

IF Billie Eilish’s moody Bond theme is anything to go by, there is heartbreak in store for 007.

No Time To Die, penned with her brother Finneas, for the upcoming film of the same name, dropped yesterday.

Its lyrics hint that Daniel Craig’s Bond will be double-crossed by love interest Madeleine Swann, played by Lea Seydoux .

Her lyrics appear to give away the twist, which will be the final outing for Daniel as the iconic British spy.

As well as the lyrics “I should have known I’d leave alone”, she sings: “You were my life, but life is far away from fair.

“Was I stupid to love you? Was I reckless to help? Was it obvious to everybody else? That I’d fallen for a lie, you were never on my side.

THE song is a nod to the days of classic Bond and is a perfect tribute to end Dan-iel Craig’s era as 007.

Fans of the US pop star could have been expecting a more modern masterpiece but Billie has tastefully followed in the suit of some of the best Bond songs, with soulful lyrics and an orchestra.

She gives the song her own edge by using the youth and softness of her voice, choosing to gently utter the heartfelt lyrics rather than follow in the footsteps of Sam Smith, Shirley Bassey and Adele by belting them out.

Billie’s individual sound gives the song vulnerability and an edge that fits beautifully the end of this era.

“Fool me once, fool me twice, are you death or paradise? Now you’ll never see me cry, there’s just no time to die.”

When going to press, the song had already racked up 9million YouTube views.

I told last month how Billie will give the first performance of the song at the Brits.

And she’ll arrive in style in Bond’s Aston Martin DBX. It certainly beats the Tube.

AFTER starring in 9 To 5 The Musical, Amber Davies has landed another big ­theatre gig.

The Love Island winner will appear in Bring It On alongside 2012 Strictly champ and Olympic ­gymnast Louis Smith.

Featuring music by Hamilton creator Lin-Manuel Miranda, the stage version of the cheerleading comedy flick opens in Birmingham in June and tours the UK. A theatre source said: “Louis is throwing himself into teaching Amber how to do amazing backflips.”

Amber, right with Louis, said: “I’m over the moon to be a part of this.”

Louis added: “Bring It On combines everything I’m about: Gymnastics, music and dance. I’m buzzing to be involved.”

I’m already a fan of the costumes.

OZZY and Sharon Osbourne have settled on a script for a biopic about the rock icon after spending 20 years trying to get it right.

SINGLE Sam Smith is not madly in love with Valentine’s Day.

The singer said on the Capital Breakfast radio show: “It’s my 27th year of being single on Valentine’s Day.

“It’s offensive. . . more like a funeral. I used to work at (card shop) Clintons. That’s probably why I hate it.”

At least Sam’s new single To Die For was out yesterday. An album of the same name is due on May 1, with this striking cover art.

RITA Ora has free time after having her tonsils out – and posted an Instagram video yesterday of her creating this Valentine’s Day card.

The singer, in a vest top as she recovered from her op in sunny LA, said: “I’m not the best drawer, I don’t have a lot of experience in art – but who gives a f***!”

MOST READ IN TV & SHOWBIZ

I’m sure boyfriend Raff Law will be thrilled. But we asked acclaimed US street artist Pegasus what he reckons.

He says: “It’s not the most beautiful card I’ve seen but Rita is trying to get something out in her art. It’s an abstract vision of her love life – beautiful but confused.

“Just like her piece, she has love at her core but there is lots more going on around her.”

MAN. UNITED, Pogba: “Kobe Bryant inspired me, I was shocked by his death”

Chelsea Must Be Patient With Frank Lampard And Their Rebuilding Process