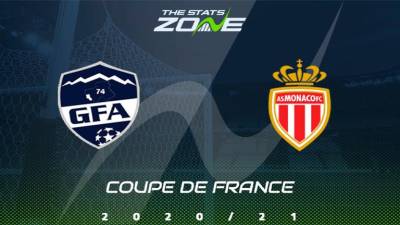 Rumilly-Vallieres, who are based in the sleepy Alpine region of Haute-Savoie, on the border with Switzerland, were only formed in 2018.

They had to play nine rounds in the cup since October with wins including one walkover and three victories on penalties.

On Thursday, they briefly dreamed of a final showdown with mighty PSG when they took the lead after just 20 minutes through Alexi Peuget’s effort.

But seven minutes later, Monaco, who are third in Ligue 1 and still in with a chance of the title, were level when Arthur Bozon put through his own goal.

Aurelien Tchouameni made it 2-1 by the interval before Wissam Ben Yedder (55th minute), Cesc Fabregas (78) and Aleksandr Golovin (82) completed the formalities.

“We will remember the magical moments of our adventure such as the departure for the stadium with thousands of people in the town,” said Rumilly-Vallieres coach Fatsah Amghar.

“It’s a moment that will remain unforgettable.”

Monaco formed a guard of honour for their unheralded opponents after the game.

“I congratulate Rumilly, their coach and the players, for their journey and their match tonight,” said Monaco coach Niko Kovac.

“They played well, especially in the first half when they put a lot of intensity into the game.”

The final takes place in Paris on Wednesday where Monaco will be looking to avenge their defeat to PSG in the last final they played – a 1-0 extra-time loss in 2010.

PSG squeaked past Montpellier 6-5 on penalties in their semifinal on Wednesday.

Spot kicks were required after the two sides were all square at 2-2 after normal time in Montpellier. – AFP